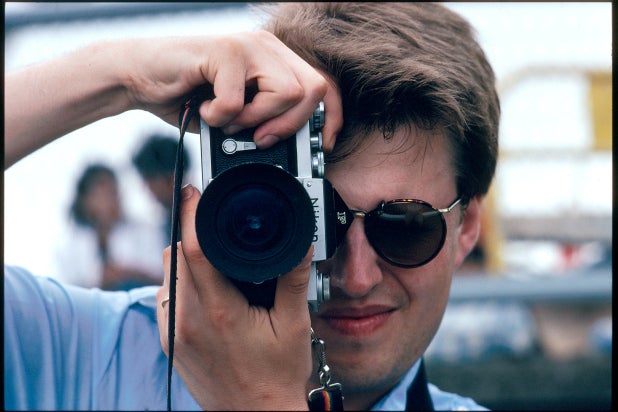 Author Stieg Larsson’s legacy, for Americans at least, stops at his contribution to the crime-novel industry, with the posthumously-published Millennium trilogy series that sparked a large handful of adaptations and doesn’t seem to be stopping soon. But a new Swedish-language documentary about the author, Henrik Georggson’s “Stieg Larsson: The Man Who Played With Fire,” seeks to place the late literary sensation and his works within the context of the writing that occupied the better part of Larsson’s life: the documentation of Nazis and the far-right in Europe.

Colleagues of Larsson’s take turns leading us through their time working with him, and you may or may not be surprised that many (or most) of them are women: crime reporter Ewa Tures, reporter Anna-Lena Lodenius, Expo magazine co-founders Jennie K Larsson and Emmy, and his life companion Eva Gabriellson among them. Whether male or female, however, all describe a driven, obsessive, and frustrating but good-hearted man whose life was singularly devoted to the cause of exposing neo-Nazis, so much so that it ruined his relationships and likely led to his untimely death at the age of 50.

Georggson combines talking-head interviews with dramatic re-enactments and archival footage. Actor Emil Almén, who once played a cop in the original “The Girl With a Dragon Tattoo,” transforms into the geeky, bespectacled Larsson; though so many documentary re-enactments can come across slapdash, Georggson’s attempt to create an authentic portrait of his subject with period-appropriate production design and costuming results in a mood not unlike a David Fincher film or a Larsson novel.

The director coyly removes the novels almost completely from the conversation until much later in the film (which is also accurate to Larsson’s life). At first, it’s difficult not to see Larsson’s activity of documenting hate through the lens of the characters –thinly veiled projections of himself — he would later write. But Georggson so thoroughly delves into the rise of these hate groups, using Larsson’s writings and research as the guide, that the novels become inconsequential to the man’s life and to the film. This is Larsson’s biography, but the film becomes more so a biography of modern hate groups as told through the life of the man who tried to expose them.

We meet Larsson when he’s working in the graphics department at TT News Agency, where he was employed for most of his life. At this point, however, he was an artist, creating enticing infographics to accompany written pieces. It was in his free time, after hours, that he began to compile the most comprehensive research on Swedish hate groups next to that of the secret police. This is in the 1970s, when the general public had universally agreed that Nazis were gone now and thus unimportant. But Larsson saw little threads of what would grow and mystified his friends when he began attending Nazi rallies and meetings, subscribing to white nationalist publications under assumed names. This was before the internet, when identifying extremists required moving among them, nonchalantly photographing them, and tracking them back to their apartments.

By the time the anti-imperialist, anti-authoritarian Swedish prime minister Olof Palme was gunned down in 1986, Larsson had already been anticipating some catastrophic act of violence; the footage of Nazi street rallies Georggson chooses to include from that time are soaked in violence and offer a counterpoint to the American belief that Sweden is a kind of socialist wonderland. Something Larsson says himself again and again in interviews and writing is that wherever there is economic strife, there will be those who exploit rational anger for irrational racial and religious resentment.

This film feels like required viewing; every single prediction Larsson makes about the far-right comes true and continues to do so long after his death. Frankly, this reads like a documentary that could be made 20 years from now about the current moment of hatred. Hate is cyclical, ever-persistent, and, above all, the same everywhere you go. It’s honestly breathtaking to hear Larsson’s thoughts about hate’s constant rebranding in Sweden at the time — Nazis taking on the name of the Swedish Democrats and adopting nicer manner and dress to work their way into national politics, other Nazis deriving financing from starting a “Viking” record label to propagandize music for youth recruitment — because what happened in Sweden, happened in Nazi Germany, and is happening today in the United States.

Though Larsson had his faults — an obsessive personality that drove away friends and colleagues — he becomes a sympathetic figure that transcends his fictional characters. Years ago, when I’d seen the first adaptation of his novels starring Noomi Rapace, I felt perhaps it was too gruesome, too sadistic to its women. After being walked through the decades of death threats he and his colleagues received, and seeing Larsson’s own footage in which Nazi skinheads sickly taunt him as the police drag them away, that darkness in his works seems inevitable. He made Lisbeth Salander a woman but imbued her with his own qualities, magnified to superpower.

Still, watching this documentary, I assumed there would be an unexplored darker side to Larsson that Georggson missed, but as Larsson’s life partner Gabriellson implores: “I want Stieg to be remembered for practicing what he preached.” Georggson certainly hits that note.