Movie producer and executive David Brown, whose six-decade career produced box office hits and Oscar winners alike, died Monday at his home in Manhattan after a long illness. He was 93.

In partnership with Richard Zanuck, with whom he formed the independent production company Zanuck-Brown in 1972, Brown produced a string of financial and critical successes, including 1974 Best Picture winner "The Sting," starring Paul Newman and Robert Redford. They also hired Steven Spielberg to direct his first feature, "The Sugarland Express," and later tapped him for the blockbuster "Jaws." 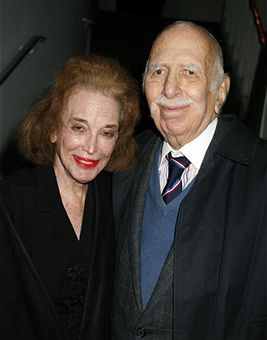 Brown was married for more than 50 years to Cosmopolitan magazine editor and author Helen Gurley Brown, who survives him.

Born in New York City on July 28, 1916, the young Brown went west to Stanford University intending to be a physicist. However, he felt overmatched by physics and higher math, and instead majored in what he described as "the softest discipline I could think of, which was journalism." After graduating from Stanford in 1936, he returned to New York to earn his master’s degree in journalism from Columbia University in 1937.

He apprenticed at a San Francisco newspaper and the Wall Street Journal, and then became a copy editor and theater critic at Women’s Wear Daily. Shifting to magazines, he had a stint as managing editor of Cosmopolitan, where his duties included penning attention-grabbing cover lines. Later in life, as an unpaid staff husband, he returned to writing the cover lines for the magazine, then edited by his wife.

"David Brown was a force in the entertainment, literary and journalism worlds," said Frank A. Bennack Jr., vice chairman and chief executive officer of Hearst Corp. "We are very lucky at Hearst to have worked with him and his legendary wife, Helen, for many years. His expansive body of work will be enjoyed by people around the world for many centuries to come. He will be greatly missed."

Brown also wrote short stories and articles for national magazines like Collier’s, Harper’s, the New Yorker and the Saturday Evening Post, as well as for the New York Times.

Brown also authored a number of books, including his most recent, in 2006, "Brown’s Guide to the Good Life Without Tears, Fears or Boredom."

With his eclectic journalism resume and a clear sense of narrative, Brown caught the eye of legendary Hollywood studio chief Darryl F. Zanuck, who hired him in 1951 to head the story department at 20th Century Fox. To prepare for his second move west, Brown, who then preferred plays to movies, had to take what he called "a crash course in moviegoing."

From 1952 to 1971, Brown rose through Fox’s executive ranks, surviving two firings, one of which briefly took him to Warner Bros., where he was executive VP and a member of the board of directors. While at Fox, Brown began his longtime friendship with Richard Zanuck, son of Darryl.

Also while at Fox, in 1959, the twice-divorced Brown met and married Helen Gurley, then an advertising copywriter in Los Angeles.

Brown and Richard Zanuck formed Zanuck-Brown in 1972 and it continued to produce films until they dissolved the company in 1988.

"Jaws" was one of their biggest hits, creating the paradigm of the summer blockbuster and cementing Spielberg’s reputation. Brown and Zanuck produced "Jaws 2" in 1978.

Brown also produced stage and television productions, including the Broadway musical adaptation of "Sweet Smell of Success." Shows he helped transfer to the New York stage include "Tru," "A Few Good Men" and the musical version of "Dirty Rotten Scoundrels." He also was executive producer of 1996 CBS miniseries "A Season in Purgatory" and two movies for HBO.

Brown received numerous career honors over the years, including the prestigious Irving G. Thalberg Memorial Award from the Academy of Motion Picture Arts & Sciences in 1990 and the David O. Selznick Lifetime Achievement Award from the Producers Guild of America in 1995.

Other honors included the IFP Gotham Award in 1993, the ShowEast Lifetime Achievement Award in 1998, the Writers Guild of America (East) Evelyn F. Burkey Award in 1999 and ShoWest Producer of the Year in 2001.

Brown earned another Best Picture Oscar nomination as producer of "Chocolat" in 2001.

Asked to what he attributed his success in Hollywood, Brown once said, "I keep my word, even when I make a mistake. I never lived beyond my means, and therefore, I never had to be a slave to Hollywood. I always had this feeling that I could go back to journalism. Unlike many Hollywood people, I had another career."