The screening of an Iranian film at the Los Angeles Film Festival on Saturday became the occasion to debate the turmoil happening a half a world away, while serving as a timely reminder of the struggle for women’s rights under Islamic regimes in the Middle East.

Based on a true story, "The Stoning of Soraya M." tells the tale of Soraya (Mozhan Marno), an innocent women entangled in an unhappy marriage who is falsely accused by her husband of having an affair with a man in their remote Iranian village. 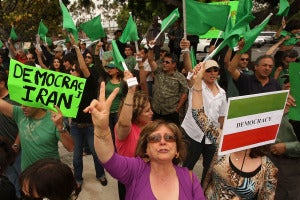 Soraya’s husband schemes with the town elders to make sure his wife is charged with the ultimate penalty – being stoned to death by the whole village. Her only hope and supporter is her Aunt Zahra (Academy Award nominee Shohreh Aghdashloo), who later boldly shares Soraya’s story with a journalist passing through town.

In real life, that journalist was Paris-based Freidoune Sahebjam, whose book of the same name was the first to bring attention to the real Soraya, who was stoned and killed in 1986.

The film is at once profoundly powerful and deeply disturbing: the prolonged and graphic scene depicting stones being thrown at Soraya – bloodied and buried to her waist in sand – elicited audible sobs from the packed audience at the Mann Festival Theater.

"I’ve seen the real thing on tape and in comparison, the scene in the movie is nothing," said director Cyrus Nowrasteh, who sat alongside Aghdashloo and Iranian writer and scholar Reza Aslan on a panel moderated by "Kite Runner" author Khaled Hosseini immediately after the screening. "I just felt I had the responsibility to not water it down for the people who have died this way." 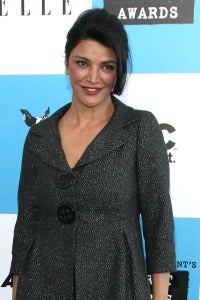 Shohreh Aghdashloo (pictured right), who received a standing ovation from the audience for her performance, said she immediately wanted to become a part of the film upon hearing about its subject matter because she had viewed an actual stoning on-tape years prior. She recalled the difficulty of shooting such an emotional scene – which took six days to film in its entirety.

"On the fourth or fifth day of filming the stoning scene, I had dust in my eyes, there were angry men stomping on the ground and everyone was chanting ‘Allahu Akbar’ [‘God is great’]. It became hard to tell what was reality and what was a dream," she said.

Reza Aslan explained that Islamic law has long struggled with stonings because they are not written about in the Koran. The culture has responded to this problem by making it nearly impossible to be convicted of adultery: one has to be caught during fornication by four men of "blameless integrity" who all witness the act at the same time.

"They’ve created these obstacles instead of legal scholars simply saying, ‘this is absurd,’" Aslan said. "The issue at hand is really more about the way woman get treated – not religion, but women’s rights. We’re talking about cultural practices – not religion – because there is no such thing as religion separated from culture."

Meanwhile on Saturday, thousands of protesters filled the streets of Tehran, combatting police with tear gas and batons on the seventh day of post-election protests by those who believe President Mahmoud Ahmadinejad’s victory was rigged. Reports put the death toll at as high as 150, and CNN said that 19 were killed Saturday.

And in Westwood, demonstrators lined the streets on Saturday, wielding red, white and green flags to show their support for protests in Iran.

"This film is so connected to the extraordinary events occurring in Iran," Hosseini said. "The uprising has a lot more to it than Ahmadinejad. This is years of frustration from a sophisticated society of people finally breaking open."

"Whatever happens, Iran won’t be the same after this," Aghdashloo said. "My friends inside the country are telling me this looks like the 1979 year of revolution. We’re at the dawn of democracy with more transparency where it’s dialogues coming out instead of monologues coming down."

Hosseini was brought to the festival as an artist in residence by LAFF’s director, Rebecca Yeldham, and told he could screen any film of his choosing. He initially had reservations about "The Stoning" because he felt it might further promote negative stereotypes about Islam, but said he ultimately couldn’t ignore the film’s power.

"After I saw it, I felt like the breath had been knocked out of my chest and I kind of wanted to knock somebody out, too," he said. "The film is bold and not willing to sanitize the horrific truth."

"I’m hoping now that the information is out there that together we can end this barbaric form of punishment," Aghdashloo said. She advocated visiting the movie’s website to pledge money and support towards stopping the brutal punishment.

But to really make change, Aslan believes the Middle East will have to further its social, economic and political development.

"We have to see what we can do to change the culture and situation, by promoting education," he said. "We have to do more than worry and complain. We can’t just sit in a theater and mourn it."