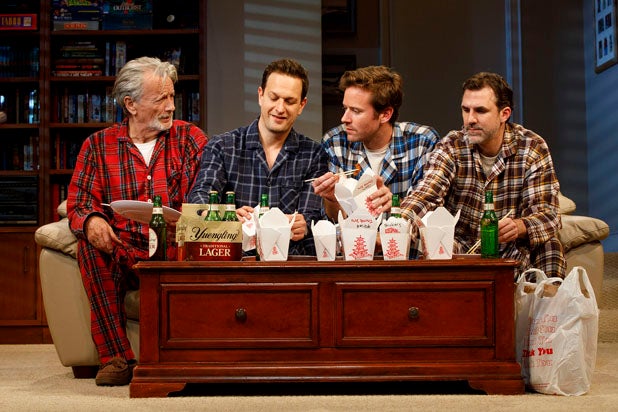 Young Jean Lee keeps the most fascinating character offstage in her play “Straight White Men,” which opened Monday at the Helen Hayes Theater after a run at the Public Theater in 2014. We don’t see this wife and mother of three adult sons because she is dead. Mom, though, is clearly the major influence over the husband and sons she left behind as this family gathers to celebrate Christmas. The four men pointedly don’t believe in the divinity of Jesus Christ, which makes the religious holiday just one of many empty rituals they enact anyway, often in painstaking observance of tradition.

In addition to all the usual holiday decorating and gift-giving, these straight white men take a fun-filled moment to change into nonmatching plaid pajamas and sit together on a living room sofa that comfortably sits only three in order to eat their take-out Chinese food right out of the box. Also very ritualistic is all the male-on-male horseplay, like wiping your sweaty armpits after a good morning run and then wrapping the soggy hand towel around your brother’s face to asphyxiate him before he can wake up from a bad hangover.

And then there is the ritual of Privilege, which brings us back to Mom.

While most white children of this generation played Clue or Monopoly, Mom invented a game called Privilege in which her boys could learn how not to take advantage of their status as straight white men. Yes, how not to! In other words, Mom is fascinating the way unicorns are fascinating.

The woman has had mixed results with her liberal agenda. Jake (Josh Charles) is a successful banker, but did marry a black woman, with whom he begot a few children before getting a divorce. Drew (Armie Hammer) is a tenured professor, but did write a novel that one critic called “a radical attack on the crassness of American materialism.” And then there’s the oldest son, Matt (the meticulously understated Paul Schneider). He’s the kind of card-carrying ACLU wimp who, long ago, led a protest against a school that cast an all-white production of “Oklahoma!” But that was then, and now he’s living at home with Dad (Stephen Payne) and working as a copy-boy temp at a local nonprofit despite having a degree from Harvard, as well as a very big dick, according to Jake and Drew. Apparently, size doesn’t run in the family.

Lee introduces the Privilege board game early in her play and then drops it cold. Jokes about going to jail for making a homophobic or sexist wisecrack are forced and don’t land. Much better is her rendering of an ersatz job interview. In a kind of intervention, Dad and Jake teach Matt how to talk to a potential man-boss. But the self-effacing Matt, who has taken Mom’s place as the cleaning person and server of food, doesn’t know how to lie effectively. Despite Mom’s sensitivity training, Dad and the brothers can’t fathom Matt’s committed complacency in the face of all his privileges. For them, he’s a total disgrace.

“Straight White Men,” in its labored sermonizing, manages to create sympathy for Matt. Who knew the pressure society places on this endangered species? Matt believes that Mom, had she lived to see his lack of conformity to society’s expectations, would approve of his out-of-the-box choices.

That’s a real stretch. Women are often much more liberal than men, except when it comes to their own sons, especially an eldest son. But this unseen fantasy female character is Lee’s, not mine.

Like so many 90-minute plays these days, “Straight White Men” is a mildly amusing extended skit. Lee gooses her fragile and very contrived story line by having the men engage in outrageous horseplay. But their dancing, singing, and physical gross-out antics are the kind of theatrics one learns from watching too many episodes of “Two and a Half Men.” In between all the man-child bits of business, the actors are stuck being terribly concerned about Matt. The performances are credible. While Charles and Hammer are convincing in their Broadway debuts, they’ve played the role of the corporate jerk (Charles) and the snooty intellectual (Hammer) in far better movies and TV shows. Also, Le’s set up of the family dynamics is so strained it’s hard to believe these men spent any time together beyond rehearsals, led by director Anna D. Shapiro.

Under the circumstances, credible is a success.

What Shapiro can’t make work on any level is Lee’s framing device. Kate Bornstein and Ty Defoe essay characters that are identified in the Playbill as Person in Charge 1 and Person in Charge 2, respectively. In a play about privilege, the most blatant flexing of one’s prerogative is Lee’s decision to begin “Straight White Men” by having Bornstein and Defoe address the audience. Outfitted in “Mamma Mia!” rejects (costumes by Suttirat Larlarb), they give us their bios – not the bios of Person in Charge 1 and Person in Charge 2, but their own personal bios. These profiles focus almost exclusively on ethnicity and gender identification, and Bornstein and Defoe encourage us to applaud these disclosures, as if they were accomplishments. They also give thumbs-up to the loud pre-curtain music, and in a gesture of superiority regarding taste and endurance of eardrum pain, they defy the audience to disagree. Some would call it machismo. Or is that machismx?

My guest for the evening asked me, “Does this kind of thing always go on at critics’ previews?”

Bornstein and Defoe reappear during the very awkwardly staged scene changes. These silent cameos include their escorting the actors on stage, as if any of them were physically challenged. But make no mistake: Bornstein and Defoe are not there to take Mom’s place. That clean up job is left to two stagehands, one of whom is white and male and (how do I put this?) of undisclosed sexual orientation. After removing the beer bottles and bowls of popcorn that Hammer & Company have been directed to leave behind, this stagehand never fails to give Bornstein and Defoe a sheepish nod, as if to say, “Sorry for taking up so much of your time.”

Now, there’s a guy Mom would have no problem applauding.