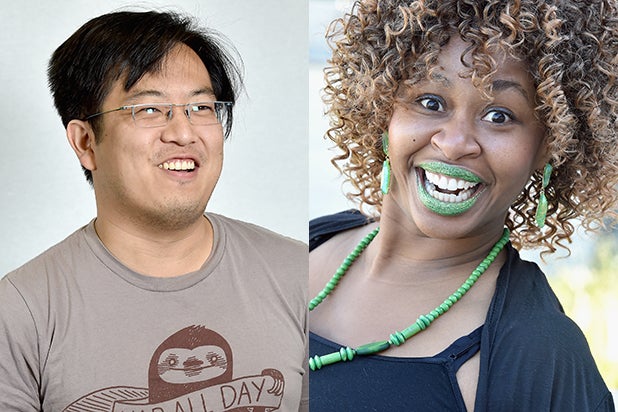 The Streamy Awards, honoring the best in YouTube and online video, will be broadcast live this year for the first time ever on VH1 in addition to streaming online. Among two of the nominees you’ll see on VH1 are YouTube stars Freddie Wong and Glozell.

Digital content is more mainstream than it’s ever been, and the amount of attention directed at content creators is only going to keep growing. What effect that might have on the Hollywood industry remains to be seen, but few would have a better idea than the creators themselves.

TheWrap spoke with Wong and Green at the Streamy Awards nominations announcement on Wednesday about the rising profile of digital content, and its benefits and potential consequences. Read the best of the interviews below:

On expanding his audience: “We’re at a scale where trying to please that entire audience is impossible. Because everybody has come to us from a different place. So for us, the focus is on making a good show and telling good stories with good scripts.”

On the popularity of online content: “I would argue that if you want to look at just people watching, a lot of these TV shows have ratings that don’t do so well when you compare them to some online series … I don’t think that you necessarily need to look at it as though one is bigger than the other, or one is better than the other. It’s just that people are looking for ways to entertain themselves and now they have more platforms to do that.”

“If you back up your age demographic and you go and talk to high school or college-aged kids, online content drives their conversations much more than anything on TV.”

On the focus of media attention: “The media is going to cover what they understand, that’s just the natural generation gap. I think that there’s a very similar attitude anytime something’s new. Toward whatever the young people are getting into.”

The consequences of digital content going mainstream: “It’s going to start to get a little more commercial. Because, you know, everybody’s going to try to make their paper.”

On interviewing President Barack Obama in March: “It was remarkable. And it really helped solidify how far the internet has come.”

“I did ask him, ‘What are you going to do about the gay and lesbian community and letting them get married?’ And then he did it. So basically, I’m the reason that it happened. I want to get credit for that. So he can go ahead and call me whenever something comes up so that I can advise him.”

On the president’s outreach efforts: “But when he gets out of office, I would hope that he keeps in contact with the internet community. I would hope for the same from the president that’s coming in. Whoever she may be.”

On being a role model: “If you have a following, which for me is over 7 million people, then you’re going to have some influence regardless of what your intentions are. So you might as well guide it in a positive way.”