Rampant, unbleeped expletives. Winners who wondered what was going on. A host who said the gig was good practice for his next job, "hosting the trainwreck awards." And not one streaker, but two.

"I am so confused about this awards show," said "The Guild" director Sean Becker, who won for Best Directing for a Comedy Web Series. 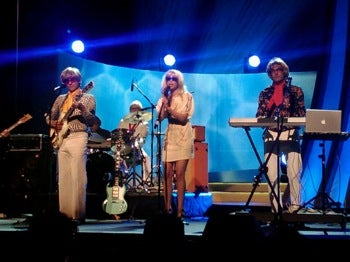 The three-hour show, which kicked off with a song-and-dance number and also included actress (and Streamy winner) Illeanna Douglas fronting a rock band while wearing a platinum blonde wig (right), gave a couple of its big awards to the absent Zach Galifianakis, who won for Best Male Actor in a Comedy Web Series for "Between Two Ferns," which also won for Best Comedy Web Series.  In the one-on-one interview spoof, featured on Funnyordie.com, Galifianakis plays himself as a clueless and not-to-be-bothered host.

Other acting winners included Felicia Day for "The Guild," Rachael Hip-Flores for "Anyone But Me," "Weird Al" Yankovic for "Know Your Meme" and the ensemble cast of "Easy to Assemble." 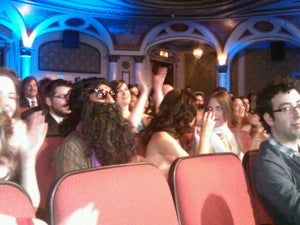 With funky audio, moments when the wrong clips were shown, a colorful audience (left) and a variety of other technical problems, the show had a loose, ragged feel.  "Last year’s show was very serious, and this year we’re a lot more playful and uninhibited," saidd Brady Brim-DeForest, chief executive officer of Tubefilter and one of the show’s executive producers.

He laughed.  "We learned a lot tonight."

The show’s host was Paul Scheer, from MTV’s “Human Giant” series, FX’s “The League” and HBO’s “Funny or Die Presents."

The awards are presented by International Academy of Web Television, an invitation-only group of professionals in online entertainment, and co-hosted by new media companies Tubefilter and NewTeeVee.
Members of the academy view shows submitted through free public submissions process, before voting on winners in 35 creative categories, including acting, directing, editing, and special effects. (Winners in the craft categories were announced on April 7 at a separate ceremony at the Barnsdall Art Center in Hollywood.)
"At the end of the day, we’re trying to shine a light on the tremendous number of people who are creating independent video content," said Jamison Tilsner, treasurer of the International Academy of Web Television and another of the show’s executive producers.
"The production values vary, but the common thread is that they’re telling stories that connect to an audience."
"Agents of Cracked" won the Audience Choice Award, the only prize not chosen by academy members.
Chad Hurley, the CEO and co-founder of YouTube, was given the first Visionary Award for personifying "the innovative spirit that is democratizing entertainment media."
For a full list of nominees, click here.
The winners:
OVERALL SERIES
Best Comedy Web Series: Between Two Ferns with Zach Galifianakis
Best Drama Web Series: The Bannen Way
Best Hosted Web Series: Diggnation
Best News or Politics Web Series: Auto Tune the News
Best Animated Web Series: How it Should Have How It Should Have Ended
Best Branded Entertainment Web Series: Back on Topps (Topps, Dick’s Sporting Goods)
Audience Choice Award for Best Web Series: "Agents of Cracked"
DIRECTING