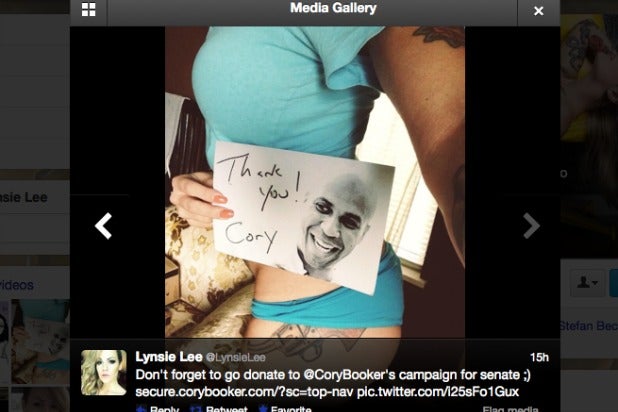 I’m using the words “sex” and “scandal” ironically, because there’s no indication anything sexy or scandalous happened. But the situation did add some comedy to the Newark mayor’s Senate campaign. And we got to see the fun spectacle of a vegan stripper shaming the New York Times into updating one of its stories. (They were nice about it. Everyone likes vegan strippers.)

A year ago, Lynsie Lee, a vegan stripper from Portland, tweeted to the New Jersey Democrat, saying the West Coast loved him.

Booker messaged the kind of response you could send your mom: “The East Coast loves you, and by the East Coast, I mean me.”

BuzzFeed unearthed the exchange, which became a big deal because Lee is a stripper, is topless in her profile picture, and because covering Senate campaigns can be boring. Questions abounded:

Was Booker trying to throw off speculation that he is gay, after previously fueling it by declining to comment either way?

Could it be that he thought tweeting with a stripper would play better with the family-values crowd than dating a man?

What makes a stripper a vegan stripper?

Lee seemed to eat it up, in a non-carnivorous way.

Also read: ‘Brick City': What Reality TV Should Be (and Mark Zuckerberg, Too)

“We did nothing wrong but exchange an innocent flirt almost a year ago. Media is inept,” she told one Twitter fan.

She also called out BuzzFeed for reporting the original exchange, and the New York Times for not contacting her before reporting on the situation.

“Nobody even asked me questions from NYT,” she wrote. Later she added: “NYT contacted me. Should have a corrected piece soonish?”

Soon after that, the Times’ Michael Barbaro posted: “NYT Booker Twitter story, updated with feedback from @LynsieLee.” In the updated story, Lee conceded that she had a “slight crush on the mayor.”

In tweets Wednesday, she bounced between amusement and bafflement at her sudden fame. She also implored fans to donate to Booker’s campaign.

“I better get so many customers at work tomorrow hahahah ;)” she tweeted. She added at another point: “All of this just makes me wanna cuddle @CoryBooker“

Booker spokesman Kevin Griffis commented: “The mayor talks with people from all walks of life on Twitter. The most shocking part of the story was learning that there is a vegan strip club in Portland.”

Full disclosure: Last night, your humble correspondent tweeted the following to Lee: “Good luck in all your endeavors.” Then I tweeted to my 17 or so followers: “Hey look, now I’ve tweeted to a stripper, too. Where’s my scandal?”

I don’t want to brag, but Lee favorited my tweet. You guys, I think that stripper is totally into me. I’m totally paying for the vegan champagne room.