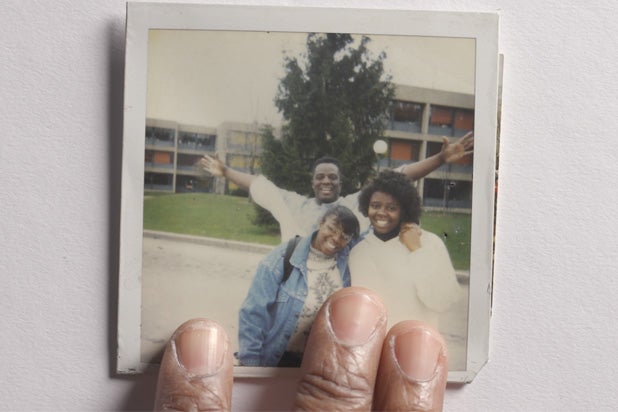 Yance Ford’s outstanding and sensitive debut, the documentary “Strong Island,” details the murder of her brother at a car shop in the early 1990s and how his killer got off scot-free, a tragedy that she treats from many different angles. The first scene shows Ford calling a cold and unfriendly female prosecutor who handled the case and who refuses to speak about it. From there, Ford offers a series of scenes where her mother, her sister, and she herself speak about the murder.

The title is a reference to the segregated area of Long Island in Central Islip where Ford and her family lived. For most of this movie, Ford’s mother, Barbara, faces the camera in her kitchen, projecting both raw emotion and held-back dignity as she speaks slowly and momentously about the loss of her child. “My son,” she says, her eyes welling with tears, “lying dead in a coffin… with the most peaceful look on his face.” She couldn’t wait to get to court “so that his death wouldn’t be in vain.”

Ford maintains that she is not angry about the case and its aftermath, but what she cannot accept is that others got to define her brother, William. “Strong Island” is partly about who William was and an elegy for his lost life and potential, and it is also about the destruction of a family and the way that black people are treated and judged in America. As Barbara says of the killer and the people around him, “These people weren’t wealthy, but their wealth was that they were white.”

Ford takes her time in the early sections of the film, letting Barbara tell about her romantic courtship with her future husband, which started when they were both in school together. (She had loved him from afar since the sixth grade and pretended nonchalance when he asked her out for the first time.)

Barbara became a teacher, the principal of a high school, and finally worked at a school on Rikers Island that dedicated itself to giving job skills to inmates that could be used when they got out. Barbara’s own father died of a respiratory attack because he was made to wait in a black section of a hospital when she was young.

Ford speaks of reading her brother’s Playboy magazines and having to keep the fact that she was gay to herself. Her family was very good at hiding things from the world and from each other whenever necessary, and so they were very aware when this skill failed them after the murder of William.

Describing herself in a grand jury room with 20-odd white people who were barely paying any attention to her, Barbara says, “I became very angry with myself because, at one point, I began to cry.” She didn’t want to be seen as “another black woman who didn’t do her job with her child.”

“Strong Island” starts to intensify because Ford has structured it in a novelistic way that layers in certain information and holds some information back. In the most powerful section of the film, Ford describes a phone call from her brother where he told her about an earlier encounter at the car shop: he had acted tough with the boy who later shot him because this boy had said disrespectful things about Barbara.

Ford feels guilt over not telling her parents about this when it happened but, back then, she felt pride that William seemed to be speaking to her real, queer self for the first time and treating her as a friend. Instead of simplifying anything for us, Ford seeks to complicate and gain deeper insight into a situation that has haunted her all of her adult life, and this complication gives richness and nuance to her story.

“Strong Island” is so impressive mainly because Ford and her mother, Barbara, are such eloquent speakers in their different ways. Barbara talks slowly and regally, with near-Biblical authority, as when she remembers telling her husband, “You can’t grieve an issue that came from my body and shut me out.” Barbara wants to get her points across with maximum impact, while Ford speaks quietly and vulnerably, but with an equal need to be heard.

There is a scene late in “Strong Island” where we see Ford and her mother just interacting and not talking about the case. This serves as a sweet grace note that leads to the reveal of another crucial bit of information about William’s murder that adds to our knowledge of his righteous character and what was lost with his death.

“Strong Island” takes the worst that life might do to us and transforms it into about as poetic and unsparing a statement as can be made with the documentary form.