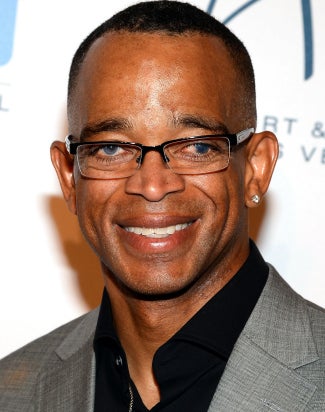 “SportsCenter” anchor Stuart Scott will forever be linked with one of the greats when he receives the 2014 Jimmy V Perseverance Award at July’s ESPYs. The network cited “the passion and determination he has displayed in the face of ongoing personal challenges” in a Tuesday press release.

Scott joined ESPN in 1993 for the launch of ESPN2 — he’s since grown to be one of the most recognizable “SportsCenter” anchors. Scott has also served as a lead host for various NFL, MLB and NBA programs including “Monday Night Countdown,” “NFL Primetime,” “Sunday NFL Countdown” and the NBA Finals.

Scott was first diagnosed with appendiceal cancer in November 2007. He underwent two surgeries and months of chemotherapy before he was given a clean bill of health. Two years later, the cancer returned.

Scott’s most recent surgery was in September 2013, and he is presently continuing with medical treatments.

“Stuart’s story is truly one of perseverance as he consistently displays strength, resilience and even humor while combating this terrible disease,” said ESPN president John Skipper. “Given how much Stuart has actively supported The V Foundation through the years from within ESPN, it is an honor to now present him with the Jimmy V Perseverance Award to celebrate the inspiration he provides to so many around him.”

Scott added: “I make a living with words and can’t remember the last time I was at a loss for them … until learning about this amazing honor. I was literally speechless. I’ve had the honor of presenting this very award before and I’ve always been in awe of the recipients. To now be a part of what they stand for is beyond description. Thank you V Foundation and thank you Jim Valvano for STILL guiding us all these years … we won’t give up … we won’t EVER give up.”

The Jimmy V Perseverance Award was named after, and inspired by, the late college basketball coach, who gave an impassioned speech at the 1993 ESPYs.

The ESPYS will be televised live Wednesday, July 16, at 9 p.m. on ESPN from the Nokia Theatre L.A. Live. St. Louis Rams draft pick Michael Sam will be honored with the Arthur Ashe Courage Award during the show.