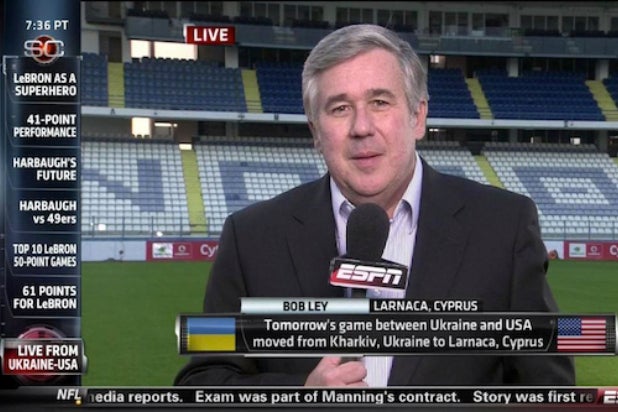 The ESPN investigative journalist was packing like a madman while he spoke with TheWrap about the upcoming World Cup soccer tournament in Brazil, his favorite assignment in an impressive career that spans the entire history of the cable giant. (OK, so he missed the first two days of ESPN’s existence, but who’s counting?)

“Oh hell yeah, without a doubt,” Ley said, when asked if the six-week-long competition is the best of all his gigs. “It encompasses everything: it’s the sport; it’s the countries involved; it’s the politics.”

He’s right: the World Cup is bigger than sports — and his network hopes to capitalize on that in a country that doesn’t hold soccer to the same religion that the rest of the world does. Last time, 2010’s tournament in South Africa, the “Outside the Lines” host got to sit with Desmond Tutu for a half hour, which Ley called some “pretty neat shit.”

On Tuesday, Ley will depart for his seventh World Cup. While they’ve all been special, this one has what he calls “the best location in the world.”

You know, except for the massive infrastructure problems.

“They’re gonna play the games, you’re gonna see them on your big screens — whether you can get to the games is an issue,” Ley told TheWrap.

Travel in the country is a nightmare, and social issues — including violent demonstrations in an election year — are a real concern. Even national pride Pele has asked his countrymen not to protest or riot during the upcoming tournament.

Similar problems have been plaguing preparations for the 2016 Olympics, which will also take place in Rio de Janeiro. Construction is way behind schedule and even the food quality has recently come into question.

But back in America, the conversation for a sport that we’ve been slow to adapt got a semi-unexpected (for non fans of the game, at least) and fully needed kickstart last week when popular striker Landon Donovan was cut from the squad.

The host and knowledgeable soccer fan told TheWrap that he doesn’t at all blame U.S. Men’s Soccer Coach Jurgen Klinsmann for the controversial decision to leave Donovan off the roster. After all, in the heat and humidity of south-of-the-equator Brazil, Klinsmann needs the 23 fittest players, not the 23 best, as Ley put it.

Without one of the most-famous American players in soccer history, one might be concerned for ESPN’s domestic ratings, but Ley says the exact opposite is true. Ley called the resulting week’s worth of water-cooler chatter — something that the lead-up to the World Cup doesn’t usually garner in the U.S. — “the best thing that happened to ESPN.”

As for the American team’s chances in the tournament, Ley says it also comes down to beating Ghana. After all, just getting out of its Group would be an accomplishment for the United States.

Then the self-proclaimed “Delta Miles prostitute” went back to packing for a month-and-a-half away from home.