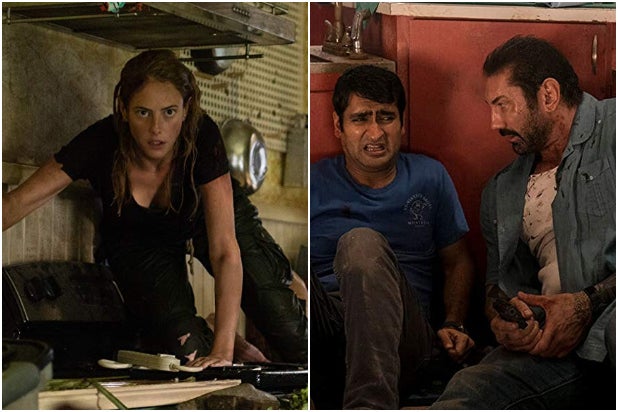 “Crawl” brought in approximately $1 million in its previews, while “Stuber” earned only $750,000. “Crawl” was projected by the studio in the $10 million range, while independent trackers have “Stuber” pegged to make around $15 million.

For a comparison, Fox’s 2014 summer buddy comedy “Let’s Be Cops” earned $3.2 million in Thursday previews and opened to $17.8 million. And Dwayne Johnson’s “Baywatch” from 2017 made $1.25 million on the Wednesday ahead of Memorial Day before opening to $18.5 million.

“Stuber” is just the third Fox film released since the merger with Disney, the other two being “Breakthrough” and “Dark Phoenix,” and it’s also Disney’s first R-rated film in six years. Bautista stars in the film as a detective who recruits his Uber driver (Nanjiani) to help him pursue a terrorist. Michael Dowse directs a cast that also includes Mira Sorvino, Natalie Morales, Iko Uwais, Betty Gilpin and Karen Gillan.

The Paramount R-rated horror movie is projected by the studio to earn in the $10 million range. “Crawl” is earning comparisons to “47 Meters Down,” with “Crawl” exchanging vicious alligators for that film’s sharks, and that movie opened to $11.2 million after earning $735,000 during Thursday previews.

Also Read: Can 'Stuber' or 'Crawl' Find an Audience in 'Spider-Man'-Dominated Box Office?

Kaya Scodelario and Barry Pepper star in the film in which a young woman attempting to rescue her father during a category 5 hurricane is forced to fend off attacks from blood thirsty alligators as she navigates a flooding house. Alexandre Aja directs and produces alongside “Evil Dead” producer Sam Raimi.