Studio Ghibli, the renowned Japanese animation studio that has brought countless classics to the big screen, among them “Spirited Away” and “Grave of the Fireflies,” is yet again teasing an upcoming collaboration with “Star Wars” masterminds Lucasfilm – this time with a cameo from co-founder Hayao Miyazaki.

Ghibli first got the internet all worked up Thursday when it posted a 15-second video of the Lucasfilm logo, followed by the Studio Ghibli logo. (It has amassed 9.7 million views on Twitter.) Now, they are further stoking the speculation by posting a photo of a small pewter Yoda. Behind Yoda is an out-of-focus but still instantly recognizable Miyazaki. The 81-year-old animator boasts a resume of modern classics, from “My Neighbor Totoro” to “Kiki’s Delivery Service” to “The Wind Rises.”

But what does it mean?

We actually have a pretty good guess.

First, you should know that Lucasfilm is deeply committed to Japanese animation. One of last year’s biggest treats was the “Star Wars Visions” series of shorts, which were handled by various Japanese animation houses with each installment having a distinct look and feel. At Star Wars Celebration earlier this year, Lucasfilm doubled down on their commitment to eastern animation, saying that “Star Wars Visions” (which returns with a new bundle of shorts next year) was just the beginning. The company is thinking much bigger – like a partnership with the biggest Japanese animation studio ever.

As to exactly what Studio Ghibli is teasing, earlier this month the Italian Disney+ Twitter account posted an image of titles coming to the service soon. One of them was curious, as it didn’t appear on any other program listings in America or anywhere else – “Star Wars Zen – Grogu and Dust Bunnies.” This might not be the exact translation for America, but with a release date of Nov. 12, it’s our best guess as to what Studio Ghibli has been working on. Described as a short in the Italian Disney+ post, does the cryptic photo today mean that Miyazaki himself directed it? Wouldn’t that be exciting? The Yoda part makes sense, at least, since Grogu and Yoda are the same species. At the very least, we’re hoping this is the beginning of a beautiful partnership between the two companies. 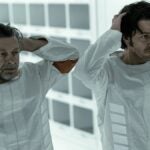