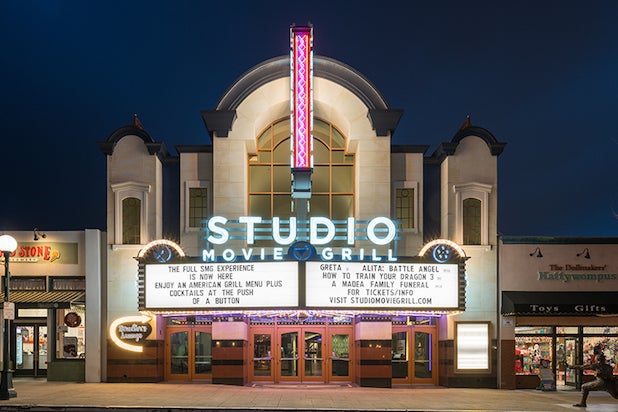 As thousands of movie theaters worldwide try to navigate the coronavirus shutdown, Studio Movie Grill is keeping one revenue stream open as the dine-in theater chain announced on Tuesday that it would keep its locations partially open for food takeout.

Starting today, ten Studio Movie Grill locations in California, Texas and Florida will serve a select menu of items including pizza, chicken tenders and beignets for curbside pickup from Monday-Saturday with plans in the future for a delivery partnership with Grubhub. The partial reopening comes as hundreds of thousands of employees at movie theaters nationwide have been furloughed as chains close their locations to prevent spread of COVID-19 while making drastic cost cuts to avoid bankruptcy.

The crisis has even affected the country’s largest chains, as AMC furloughed all of its corporate employees last week while Cinemark announced on Monday that its corporate team will take steep pay cuts. The CEOs of both chains have announced they will forgo their pay for the duration of the shutdown.

As part of the program, 10% of all food sales at these SMG locations will go to a fund to support Studio Movie Grill employees nationwide who have been affected by the pandemic.

“SMG is exploring every conceivable way to keep [employees] working while staying safe and healthy as well as offering our local communities additional food options,” said Brian Schultz, Founder/CEO. “We will continue to plan ahead for the day we can once more open our doors and welcome everyone back to relax and enjoy dinner and a movie together.”

Studio Movie Grill has also announced a partnership with Film Movement and Magnolia Pictures to make a selection of films available for digital rental at $12 each. Sales for the rentals will also go to supporting the company’s employees.