As the battle over giant billboards in Los Angeles hits a fever pitch, so far the biggest buyers of illegal outdoor ads are dodging the bullet.

That would be the entertainment companies.

Though an eight-story ad in Los Angeles landed the building owner in jail on $1 million bail, Paramount —  which purchased the giant vinyl wrapping to promote "How to Train Your Dragon" — won’t be held accountable. (Paramount is distributing the DreamWorks Animation 3D animated film.) 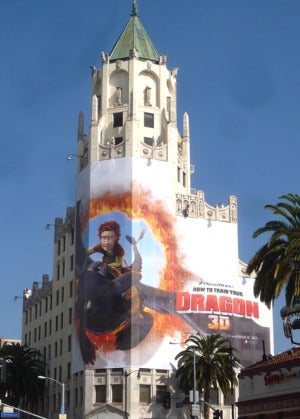 “Paramount was assured that the site had all the appropriate permits and (sic) have promptly investigated any necessary steps to be in full compliance with all applicable laws,” read a statement released by the studio Tuesday.

"I don’t think the entertainment clients should or can be held responsible for illegal outdoor advertising because when we buy inventory, we buy it as ‘legal’ — the vendor cites the locations are legally permitted," explained Kathy Hoinski, supervisor of outdoor advertising for Palisades Media, a boutique media agency that serves a number of entertainment companies. "It would be the vendor and/or building owners liability, in my opinion. I don’t know many buyers who would purposely buy an illegal unit because once it’s tagged illegal, the creative comes down immediately. The client then does not receive the full flight/duration, but is still charged for it."

With activist groups across the country — and most notably, in Los Angeles — griping ever-more-loudly about both legal and illegal outdoor ads that they say pollute their cityscapes — and city officials beginning to respond to their cries — the major studios and TV networks find themselves in the middle of a pitched battle.

“I would say 70-80 percent of the ads on illegal billboards in Los Angeles are for movies and TV shows. In fact, it might even be higher than that,” said Dennis Hathaway, president of the Coalition to Ban the Billboard Blight.

“The outdoor advertising business in Los Angeles could also be called just another marketing arm for the studios.”

“But L.A. is considered to have the biggest problem,” he said. “We’re concerned about these guys turning the city into a ‘Blade Runner’ or ‘Minority Report’ vision, in which every open space is covered by an ad.”

Last week, Trutanich filed suit against 27 individuals and companies he accused of illegally hanging giant vinyl and plastic signs on the sides of local buildings. 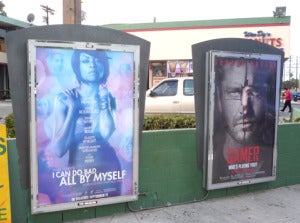 In other legal action, the city has also done court battle with companies including Fuel Outdoor, which it has accused of putting smaller outdoor signs in unpermitted locations.

But none of the defendants named in any of this litigation have been entertainment companies.

“We asked that question to the city attorney — Paramount and DreamWorks made the arrangement for the advertising, why shouldn’t they suffer?” he said. “But I think that’s legally more than the city attorney wants to bite off right now.”

Certainly, Trutanich’s office has aggressively gone after those who execute illegal ads, which Hathaway said make up about 20 percent of all outdoor displays in the city.

"If you’re a company and you have an illegal supergraphic, the days of lax enforcement are over," Trutanich told KTLA-TV Tuesda

Even Hathaway, however, was surprised by the $1 million bail amount set over the weekend for Hollywood-and-Highland property owner Kayvan Satareh — an amount that seems incongruous to misdemeanor charges that could net him only a maximum fine of $1,000 and six months in jail. (The bail amount was later reduced to $100,000 after Satereh agreed to take down the giant banner.)

"The amount of influence some of these activist groups have is truly disturbing," noted an official for a Los Angeles-area media buying firm.

According toTrutanich, besides the public safety issues he believes these heavy supergraphics present, the high bail amount also stemmed partly from the fact that Satareh had been warned not to hang anything from his building.

Weeks earlier, the city prosecutor had obtained a brochure promoting the Hollywood and Highland-situated property’s availability for digital signage and other outdoor executions during Oscar time.

Information on the brochure about which firm would broker this deal, and how to contact them, wasn’t listed.

“These supergraphic companies are really shadowy,” Hathaway said. “It’s not like dealing with (legitimate outdoor companies ) like Clear Channel or CBS.”

So how did Paramount get hooked up with these guys?

For their part, studio officials would not disclose which media buying agency purchased the supergraphic, prices for which can run as high as $100,000 per month.

“I’m sure they used a very reputable buying firm,” said one top TV network marketing executive. “I would be shocked if Paramount knew it was dealing with those people. They wouldn’t make themselves that vulnerable.”