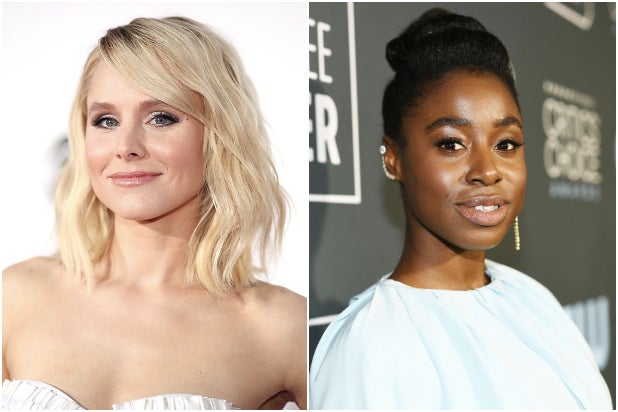 STXfilms has acquired the worldwide rights to “Queenpins,” a comedy starring Kristen Bell and “Barry” star Kirby Howell-Baptiste in a true story about two women who pulled off the largest coupon counterfeit scam in U.S. history. The project was announced Tuesday by Adam Fogelson, chairman of the STXfilms Motion Picture Group.

Bell and Howell-Baptiste are reuniting after previously working together on “The Good Place” and “Veronica Mars,” and they’ll be joined in the cast of “Queenpins” by Vince Vaughn and Paul Walter Hauser.

“Queenpins” is the story of a suburban housewife fed up of being dismissed by her husband and society who decides to take back control of her life by starting an illegal coupon club. Her creation ends up scamming millions of dollars from big food companies while delivering deals to millions of fellow coupon clippers.

Aron Gaudet and Gita Pullapilly wrote “Queenpins” and will direct, and STX will distribute the film in the U.S., U.K., and Ireland, with the studio handling international distribution through its global partners.

AGC Studios chairman Stuart Ford and Miguel A. Palos, Jr. will executive produce alongside Ben Stiller and Breean Solberg of Red Hour. The project was developed by McDonough under her Marquee Entertainment banner prior to joining AGC earlier this year.

“We love everything about this comedy, especially reuniting with our friend Kristen Bell, who is paired perfectly with Kirby Howell-Baptiste – we know they’ve got great chemistry. And Kirby has shown she is a master of this kind of comedy in ‘Why Women Kill,'” Fogelson said in a statement. “Audiences love this kind of entertainment – it’s a subversive suburban comedy for moms that dads will enjoy too. We’re thrilled to be working with Aron and Gita as we tell this fun story.”

Also Read: Kristen Bell Hasn't Seen 'Cats' but Plans to Go Once With Her Kids and Once While High

“Aron and Gita have pulled together a phenomenal cast and Queenpins is shaping up to be exactly the kind of broad multi-generational, multi-cultural comedy caper that STX have enjoyed great success with in the past. Adam and his team are a perfect home for the film and we’re excited to get going with them,” Ford said in a statement.

Howell-Baptiste is well known for her role on “Barry” and the CBS All Access series “Why Women Kill.” She’ll next be seen in Disney’s “Cruella.” She is represented by CAA, Mosaic, Sarah Stephenson in the UK and Myman Greenspan Fox Rosenberg Mobasser Younger & Light.

Guadet and Pullapilly are known for their narrative feature “Beneath the Harvest Sky” and the documentary “The Way We Get By.” They are in development with Adam McKay on “Crook County” and are directing an “Untitled Sackler Project” for 101 Studios. They are represented by CAA and Kim Hodgert at Anonymous Content.