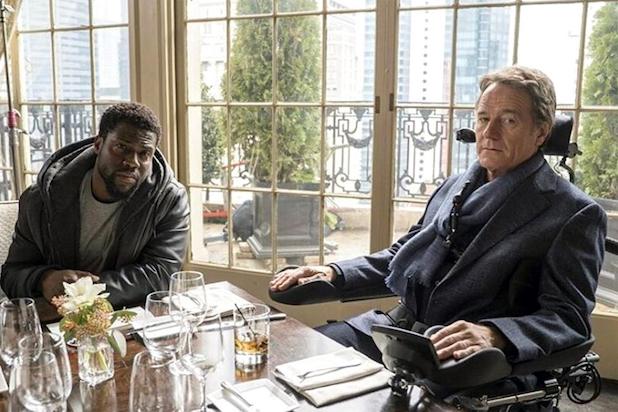 STX Entertainment announced on Wednesday it is partnering with Lantern Entertainment to acquire worldwide distribution rights to The Weinstein Co. holdover film “The Upside.”

The film, starring Kevin Hart and Bryan Cranston, and directed by Neil Burger, was one of the films acquired from TWC when Lantern Entertainment bought the studio out of bankruptcy back in May.

“The Upside,” a heartfelt comedy about a recently paroled ex-convict (Hart) who strikes up an unusual and unlikely friendship with a paralyzed billionaire (Cranston), was an indie darling when it premiered at the 2017 Toronto International Film Festival. The conversation around it as been that of a potential awards contender, making this the second contender STX has gone after following last year’s “Molly’s Game.”

The film is a sweet spot acquisition for STXfilms fitting the studio’s core model of programming titles with stars in their true signature roles. “The Upside” also stars Nicole Kidman, Julianna Margulies and Aja Naomi King. The announcement was made today by STXfilms Chairman Adam Fogelson, along with Andy Mitchell from Lantern Entertainment.

STX Films is a division of STX Entertainment.

“This is a hilariously funny and emotionally affecting film. It evokes elements of films like Trading Places and Scent of a Woman, while still being completely fresh with characters that are as memorable as they are hysterical,” said Fogelson in a statement.  “Neil did an incredible job with this comedy and we can’t wait to work with Kevin Hart, Nicole Kidman and Bryan Cranston. We are thrilled to add The Upside to the STXfilms slate and we look forward to working with the team at Lantern Entertainment.”

“The Upside” was written by Jon Hartmere. The original French-language version of The Intouchables grossed $416 million overseas. Inspired by a true-story, it chronicles an aristocrat (Francois Cluzet) who, after being injured, hires a young man (Omar Sy) from the wrong side of the tracks to be his caretaker.

Lantern’s Andy Mitchell commented, “STX is an ideal distribution partner for this heartwarming film that has universal appeal and features world-class performances.  We are grateful for this partnership and look forward to fostering a productive relationship with the entire STX team.”

The Upside is an Escape Artists production. Producers are Jason Blumenthal, Todd Black and Steve Tisch.