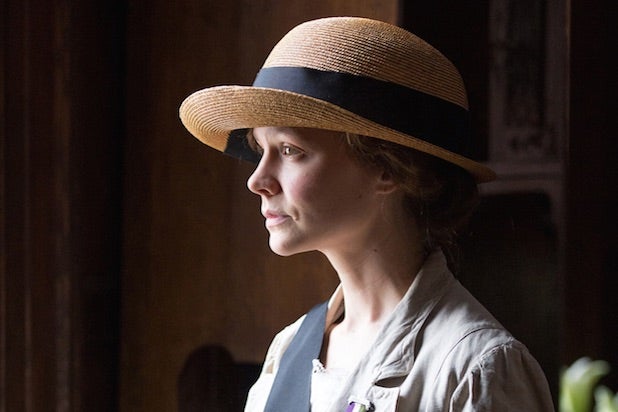 It is an astonishing thing to imagine a time when women weren’t valued enough to be given government over their own rights. It took them so long, and it continues to take so long, because to fight takes sacrifices that are near impossible to make. Fighting and protesting means being exiled, alienated, hated.

You see it today on the internet, where misogyny reigns supreme. You see it from both men and women, always with the same message: shut up and sit down. It would have been easy for director Sarah Gavron and screenwriter Abi Morgan to turn “Suffragette,” their film about the early days of the women’s suffrage movement in Great Britain, into an angry screed.

But Friday night’s premiere of the film at the Telluride Film Festival showed that Gavron isn’t much interested in the anger. The women in her film do not have the luxury of showing anger because they are in enough trouble as it is.

Indeed, “Suffragette” will be one of the year’s best films not because it makes you beat your chest and celebrate women having won a hard-fought battle, but because it may be one of the few films on the subject that makes its point by showing what women had to go through on a personal level. It is the story of Maud Watts, played by Carey Mulligan, but how many more women like her were punished for even thinking about wanting more?

Mulligan plays a good wife and mother who works in a laundry, suffers sexual harassment, toils for long hours and takes home much less pay than her male counterparts. She is reluctant to join the movement until the movement becomes too big and the injustices too obvious to ignore.

She joins a group of women who are fighting for the vote – for the right to say they are worth “no more and no less” than men. “Suffragette” is a film about what Mulligan’s character endures on the treacherous path to equality.

Gavron holds Mulligan’s face in tight closeup through the film, rarely pulling back for long shots. No director has ever done that with this actress before; what appears to be vulnerability in her other work is transformed here into an inner strength that the camera can catch only when it is pulled in close.

With her half smile and her heavy-lidded, sad eyes, Mulligan’s Maud Watts is her best performance to date. She is the reason to see “Suffragette,” and the thing that will make this film impossible to ignore come awards time. She carries it the way women used to back when they were given these kinds of opportunities.

The supporting cast, including Helena Bonham Carter, Romola Garai and Anne-Marie Duff, are all top notch, and a reminder of how few films like this exist anywhere. Telluride is unleashing the full force of the feminine this season, with this film, “He Named Me Malala” and “Carol.” They are about empowerment that means more than finding oneself on a spiritual journey. These films face down some of the forces that oppressed and continue to oppress women all over the world, including in Hollywood.

Meryl Streep, who was at the premiere, received a standing ovation. She had maybe five minutes of screen time, but Streep knows full well what a movie like this means. Produced, written, directed by and starring women, this isn’t one the Oscars can pass by and sleep at night.

Gavron’s direction is unpredictable, moody and never goes for the easy emotional cheat. That one big crescendo is absent here, and in its place is an ongoing struggle for women’s rights. One need only look at the presidential election to see how women are both on the precipice of equality and at the same time judged by a different standard, still measured by what they look like and whether or not they smile.

The costume design by Jane Petrie recalls an authentic, dirty London lifestyle that matches well with the no-makeup look of the film’s stars and the gritty cinematography by Eduard Grau. Once again, Alexandre Desplat outdoes himself with one of the film’s best assets, its suspenseful score.

Gavron is a relative newcomer to features, with 2007’s “Brick Lane” being her highest-profile previous film. But in Mulligan she finds the perfect focal point. She could have told this story when any actress in the lead and it would have been good. With Mulligan the film becomes great.

And Gavron immerses us fully in this world – we can smell it, we can taste it, we can feel it wrap tightly around our necks until we want to scream. “Suffragette” is a masterwork.

NOTE: This review was originally and mistakenly posted under Steve Pond’s byline. It was written by Sasha Stone.