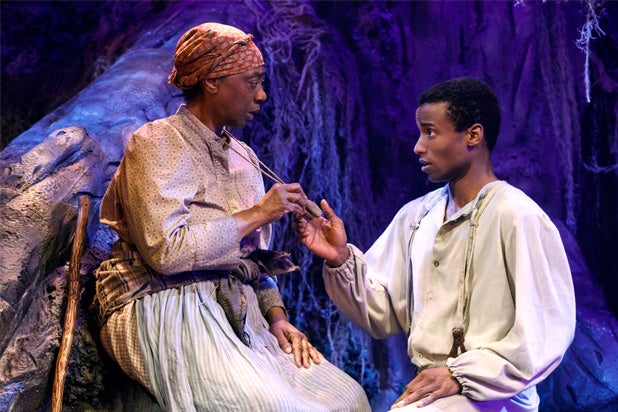 Much more than a century separates the same-sex themed “Making Love,” a major movie studio’s first look at gay love, and Donja R. Love’s new play, “Sugar in Our Wounds,” which opened Tuesday at MTC’s City Center Stage II. What puts these two wildly disparate works together is how much better both are at showing a straight woman’s anxiety at being rejected by a gay man. What neither explores with much clarity is the homosexual relationship.

Back in 1982, Twentieth Century Fox clearly had its eye on box office demographics that showed there were many more straight women buying movie tickets than gay men. If not much else, it made economic sense to have us identify with Kate Jackson being dumped by Michael Ontkean so he could fall in love with Harry Hamlin.

In 2018, the landscape is so altered that Love, in the MTC program, identifies as being an “Afro Queer playwright” who’s writing a trilogy on “queer love during pivotal moments in Black History.” The first in his series is “Sugar in Our Wounds,” set in 1862 on a plantation in the South.

Before the two slaves James (Sheldon Best) and Henry (Chinaza Uche) can declare their love for each other, a young female slave, Mattie (Tiffany Rachelle Stewart), wastes no time seducing the alpha male Henry late one night in the cabin they all share with the ancient matriarch of the group, Aunt Mama (Stephanie Berry). As effectively portrayed by Stewart, the young woman’s hunger for Henry is palpable that Mattie might be accused of rape.

Let’s just say that Henry, despite being gay, survives the experience unscathed. And let’s also say that no other scene in “Sugar in Our Wounds” comes close to duplicating the intensity of Mattie’s overwhelming desire to be touched by someone of the opposite sex. Henry’s subsequent rejections of her are heartbreaking.

Saheem Ali’s direction of the play’s first sex scene is riveting. In comparison, what Ali does with his two male actors when they finally get around to kissing can basically be described as just fooling around. Uche has far more chemistry with Stewart than Best, who plays the refined beta male to the extreme. If nothing else, we do understand why Mattie, despite sleeping many nights alongside James, never showed any interest in that direction.

Also Read: 'Pass Over' Theater Review: When the White Man Is an Alien From Another Planet

Very awkward is the scene in which James asks Aunt Mama if his attraction to Henry is “normal.” Love inadequately explores James’ internalized homophobia, especially after Aunt Mama explains that people of the same sex loving each other was perfectly acceptable back in Africa.

While the two men don’t register much excitement, Berry scores high on the Richter scale when she delivers a surprising monologue on her affairs with other women. Even before she rattles the stage with this lesbian earthquake, Berry carries the show on the shoulders of her earth-grandmother portrayal, a true force of nature in the theater.