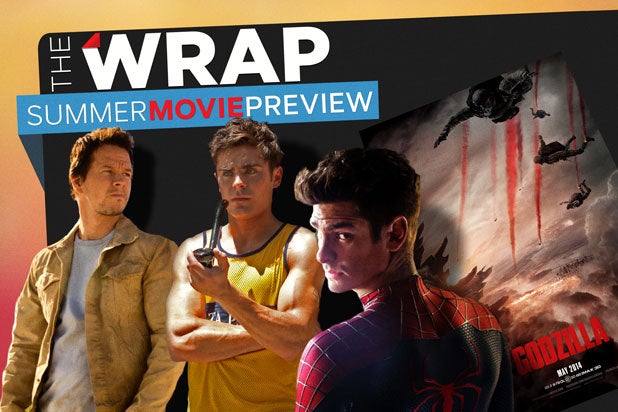 Hollywood’s busiest time of the year is just around the corner, with nearly a dozen sequels scheduled to steamroll into movie theaters from May until the end of August. But will this summer be the equal of last year’s record-breaking one?

On paper, the answer is probably not. Though this season will bring follow-ups to such Fortune 500 franchises as “The Amazing Spider-Man,” “X-Men” and “Transformers,” analysts caution that the summer of 2014 faces difficult comparisons with last year, when studios released 23 films with budgets of more than $75 million, including “Iron Man 3” and “Despicable Me 2.”

“There are a lot of films that will do just fine, but there will only be a few really huge openings,” Bruce Nash, founder of the box office tracking service The Numbers, told TheWrap.

Don’t start playing taps for the movie business just yet, however. For one thing, the domestic box office enters this weekend up more than 5 percent — and with major releases such as “Captain America: The Winter Soldier,” “Transcendence” and “Rio 2” all opening in April, the overall picture should continue to brighten.

“We had a strong February, a strong March, people are going to enjoy their April and that will give us a nice pop leading into the summer,” Dan Fellman, Warner Bros. distribution chief, said. “I’m bullish about the health of the business.”

At CinemaCon, the exhibition trade show where studios present their slates to theater owners, it appeared as though there were few films that would imperil opening weekend box office records, with the possible exceptions of “The Amazing Spider-Man 2” and “Transformers: Age of Extinction.”

“Not to take anything away from this summer — there are plenty of strong movies — but last summer was massive and it’s going to be tough for any summer to live up to that,” Phil Contrino, BoxOffice.com Vice President and chief analyst, said.

However, some studio executives and theater owners were pleased by the strong reception that movies such as “Godzilla” and “Dawn of the Planet of the Apes,” received at CinemaCon. If the movies justify that enthusiasm, they could help plug the gap.

“The overriding sense a few months ago was that 2015, where there was a Bond, a ‘Star Wars’ and an ‘Avengers’ film, was going be the year where the industry reached new heights and the consensus was that 2014 was going to be a transitional year,” Greg Foster, IMAX Filmed Entertainment president and chairman, said. “But people looking at the footage at CinemaCon realized that this summer is shaping up to be a lot better than originally expected. There were films like ‘Godzilla’ and ‘Transformers’ where people went, ‘Wow, we’ve really got something here.'”

Also read: Why Summer Movie Season Is Kicking Off in April With ‘Captain America’ Sequel

There’s another reason that executives are felling optimistic. The domestic box office may have hit a $4.76 billion high-water mark last summer, but there were several costly casualties along the way. Though “The Lone Ranger” and “R.I.P.D.” may have bombed in any season, some executives privately groused that an intensely competitive landscape that hosted a relentless stream of sequels and superhero movies resulted in cannibalization.

This year, there is more breathing room. That will mean that films such as the R-rated comedies “Neighbors” and “A Million Ways to Die in the West,” as well as smaller dramas such as “Million Dollar Arm” and “The Fault in Our Stars,” will have a chance to build an audience organically, through word-of-mouth, rather than be shunted aside after a week or two of release to make room for the next special effects extravaganza.

“I like the way the films are spread out,” Nikki Rocco, Universal Pictures’ distribution chief, told TheWrap.  “There seem to be good opportunities for counter-programming.”

That’s music to the ears of the Weinstein Co., which typically steers clear of summer’s blockbuster battles, but will releases romantic comedy “Begin Again” on July 4, sandwiched between “Transformers Age of Extinction” (June 27) and one week before “Dawn of the Planet of the Apes” (July 11).

“That’s just fine with us,” Erik Lomis, the Weinstein Co.’s head of distribution, said. “Because it’s not about competing head-to-head, it’s about providing an alternative and we think this is one people are going to spark to.”

Also read: 7 Alternative Movies to See Instead of ‘Captain America’ This Weekend

Not that there aren’t some noticeable deficiencies with the schedule. Pixar’s decision to push back the release of “The Good Dinosaur” by more than a year means that only two major studio animated films will debut this summer, “How to Train Your Dragon 2” and “Planes: Fire & Rescue.”

That’s in stark contrast to last summer, when nearly a half-dozen animated films — a murderer’s row that included “Epic,” “Despicable Me 2” and “Monster’s University” — unspooled within weeks of each other.

“Last summer there was a glut and this year there is a shortage,” Chris Aronson, Twentieth Century Fox domestic distribution chief, said. “Would I like to have one more animated film this summer? You bet. But that’s not how production schedules work.”

Of course, there’s a big difference between what trailers play well and what films eventually draw a crowd on opening night. Even the biggest stars and strongest franchises can wilt in the heat of battle, as the disappointing results for the likes of “White House Down” and “After Earth” demonstrated a year ago.

“Summer is not for the faint of heart,” Aronson said.