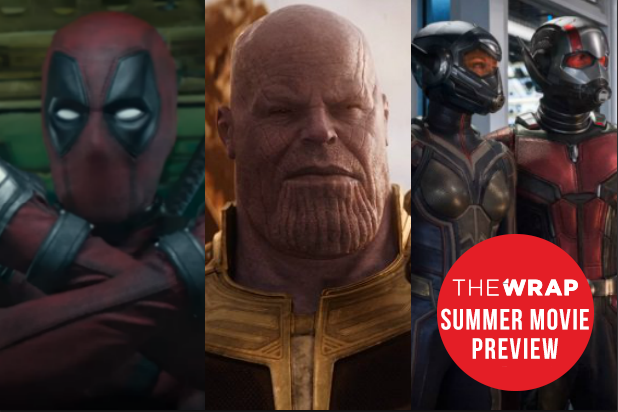 Hollywood is hoping that three Marvel movies and Disney’s first non-holiday “Star Wars” release will drive summer box office to a recovery from last year’s dismal results, which produced the worst May-August domestic ticket revenues since the turn of the century.

The superhero cavalry could not come soon enough: Domestic ticket sales so far this year stand at $3.85 million, up only 3 percent from this time last year — thanks almost entirely to last weekend’s just-before-summer release of Disney/Marvel’s “Avengers: Infinity War.”

Analysts and distribution execs project an improvement over last summer, but once again see few surefire hits outside of three based on characters from Stan Lee’s comics universe: Disney/Marvel’s “Ant-Man and The Wasp,” Fox’s “Deadpool 2” and the just-released “Avengers: Infinity War.”

“It’s no longer about directors and actors when it comes to drawing in audiences. It’s about brands and concepts,” comScore analyst Paul Dergarabedian told TheWrap. “And there’s no brand bigger in movies right now than Marvel. Even Marvel characters that don’t belong to Disney, like Deadpool, are just clicking with audiences.”

Already this year, Disney/Marvel’s February blockbuster “Black Panther” has accounted for nearly a quarter of all domestic box office revenue. By the end of July, Marvel films could still make up one quarter of 2018’s receipts, even after that total passes $7 billion.

Three weeks after “Avengers: Infinity War” is “Deadpool 2,” the sequel to a film that made $363 million in 2016, the second-highest domestic total ever for an R-rated film. “Ant-Man and The Wasp” likely won’t reach that level, as the first “Ant-Man” made $180 million domestically, but it should provide another solid boost in a July that doesn’t have another likely big moneymaker aside from Paramount’s “Mission Impossible: Fallout.”

Outside of Marvel, there’s another small group of sequels and spin-offs that will go for big numbers this summer and will be crucial to keeping turnstiles moving in June. First among them is Disney/Lucasfilm’s “Solo: A Star Wars Story,” which will arrive Memorial Day Weekend a year after “Baywatch” and a fifth “Pirates of the Caribbean” movie dropped that weekend’s totals to their lowest in nearly 20 years.

A Memorial Day hit would be a welcome turnaround from summer 2017, which failed to top $4 billion in ticket sales for the first time since 2006. The chief culprit? Disappointing returns for franchise films like Disney’s “Pirates of the Caribbean: Dead Men Tell No Tales,” Paramount’s “Transformers: The Last Knight” and Universal’s Tom Cruise-led reboot of “The Mummy.”

“Last summer was a big disappointment because a lot of franchises that were on the slate were no longer as interesting to audiences as a lot of people in the industry had hoped,” Dergarabedian said. “We could really use a turnaround on that front in 2018.”

Also Read: Final 'Solo: A Star Wars Story' Trailer Lands With a Bang: 'Assume Everyone Will Betray You' (Video)

In addition to “Solo,” exhibitors have high hopes for Universal’s “Jurassic World: Fallen Kingdom,” the follow-up to a film that made a whopping $652 million three years ago, good for fifth on the all-time domestic charts. If “Fallen Kingdom” could even make half of that when it comes out June 22, it would go a long way to sustaining the high numbers that are expected to come in during the first half of the summer season.

On the animated side, there is Pixar’s “The Incredibles 2,” a family offering that has been slowly gaining interest since its first trailer debuted during the Winter Olympics in February. The first “Incredibles” made $261 million domestically in 2004, which equates to $385 million today.

While a $300 million-plus domestic run would be a tough goal, “Incredibles 2” should post a better domestic return than last year’s Pixar summer film “Cars 3,” which made $153 million.

Finally, there are the films that are looking to surprise the Hollywood bean counters, entering midway through the season as counter-programming to the major tentpole releases.

Foremost among them is Warner Bros.’ “Ocean’s 8,” the all-female take on the “Ocean’s Eleven” franchise. That film comes out on June 8, as does A24’s horror film “Hereditary,” which has earned near unanimous acclaim since its premiere at Sundance as one of the scariest films ever to screen at the indie film festival.

But there’s still concern over whether the films coming out in July and August can put up solid numbers. Along with “Ant-Man” and “Mission: Impossible,” the slate for the second half of the summer includes Disney’s “Christopher Robin,” Sony’s “Sicario: Day of the Soldado,” Universal’s “Skyscraper” and “The First Purge,” and Lionsgate’s Kate McKinnon-Mila Kunis comedy “The Spy Who Dumped Me.”

“We’re still seeing Hollywood’s reliance on sequels this summer, but at least these are more potent sequels that audiences really want to see,” Exhibitor Relations analyst Jeff Bock told TheWrap. “But for whatever reason, even though ‘Guardians of the Galaxy’ proved you can have a hit film in August, studios have just decided to not put out any major films that month in the last couple of years.”