Action-themed tentpoles and comedies are in, adult dramas are out, 3D really works. And fear not the critics, fear Twitter.

Those are the lessons studio executives have learned from a record-breaking summer season at the box office that delivered an impressive ratio of hits to misses, while leaving only one studio, Universal, licking its wounds.

“It’s the quality of the product that counts,” said Disney distribution president Chuck Viane. “We had a lot of good movies come out this summer.”
In fact, going into this weekend, moviemakers have earned more than $4 billion domestically since the summer movie season kicked off May 1 -- nearly a full percentage point above last year’s record-breaking revenue haul, according to Exhibitor Relations.
And with Labor Day falling on Sept. 7, giving the box office an extra week to tally revenue, this summer's total might very well stand for a few years.
True, there was no behemoth quite on par with last summer’s “The Dark Knight,” which grossed $533.3 million in North America, but it had an impressive body count of profitable tentpoles.
Leading the pack was Paramount, which followed up the $256.4 million domestic performance of “Star Trek” in May with the July premiere of “Transformers: Revenge of the Fallen,” which has made $398.4 million domestically to date and has nearly $430 million in the bank internationally. (See chart for studio market share, year to date, from www.boxofficemojo.com.)
Fox franchise extensions “Night of the Museum: Battle of the Smithsonian” ($176.1 million domestic) and "X-Men Origins: Wolverine” ($180 million) also proved profitable. As did Warner’s always reliable “Harry Potter” franchise, with the sixth installment, "The Half-Blood Prince," registering $290.2 million domestically and another $596 million internationally.
Animated features also performed reliably well, with Disney/Pixar’s “Up” taking in 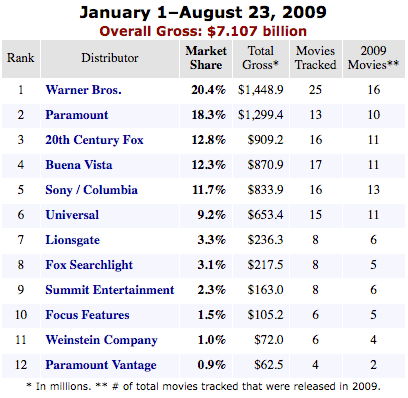 Notably, both films were released in 3D, a technology that also lifted the tallies of several films. In fact, not one film released in 3D this summer failed to clear $100 million domestically, with Disney’s Jerry Bruckheimer-produced “G-Force” sitting on the low end of the spectrum at $107.2 million.

Then there were the surprise hits, starting with Warner's R-rated comedy "The Hangover," which has done a popcorn-film-like $268.3 million to date, and Disney rom-com “The Proposal,” which has made $159 million -- not to mention resuscitating the career of star Sandra Bullock in the process.

For its part, Sony concluded the final leg of the season scoring three successive modestly budgeted hits, with female-targeted comedies “The Ugly Truth” and “Julie and Julia,” both costing around $40 million to produce and yielding domestic grosses of $59 million and $82 .8 million respectively.
Another big surprise, sci-fi “District 9” -- a pick-up that only cost Sony $25 million -- has so far cleared $72.8 million.

For his part, Sony distribution president Rory Bruer noted the significant effect of social networking on moviegoer decision making this summer -- with Twitter displacing the influence of critics in many cases.

He specifically noted the strong debut of “The Ugly Truth” ($27.6 million in late July), a romantic comedy starring Katherine Heigl and Gerard Butler that was critically eviscerated yet generated strong buzz when it was screened the week prior to its premiere.

“I really think Twitter helped get that picture off,” Bruer said.

Added Paramount distribution GM Don Harris: “Critics loved ‘Star Trek,’ but I don’t know that the movie did a nickel more of business because of that.”
Of course, the Twitter Effect worked in the opposite direction for Universal, which saw Sacha Baron Cohen’s hard-R-rated “Bruno” open to $14.4 million on July 10, only to have fast-moving poor word-of-mouth crater the film 38 percent the following day. The film flatlined from there.

“Because it was judged as a sequel to ‘Borat,’ and because it experienced such a steep drop, I think (‘Bruno’) received unfair treatment from the press and public,” said Universal distribution and marketing president Adam Fogelson. “But I defy people to point to another $42 million comedy (Universal’s acquisition costs for ‘Bruno’) that’s grossed $110 million worldwide and not deem it a success.”

For his part, Fogelson believes Universal’s summer of discontent -- which included two notable money losers -- has been played up to be worse than it actually is.

“If some of these movies had been released at different times of the year and had the same exact outcome, the perception and the stories about them would be dramatically different,” he told TheWrap, specifically citing “Public Enemies,” a $100 million crime drama directed by Michael Mann and starring Johnny Depp, which (at $96.8 million so far) is closing in on Universal’s stated goal of $100 million domestic and $85 million foreign.

Of course, Universal also endured several performances that would be deemed flops in any season they were released.  Generating only $62.5 million worldwide on a production budget exceeding $100 million, Fogelson conceded that “Land of the Lost” represented a money-losing “misstep.”

As for Universal’s other big money loser this season, dramedy “Funny People,” which has made $50.6 million on a production budget of $75 million, he said that having Judd Apatow make a movie that starred Adam Sandler and Seth Rogen was a risk worth taking, no matter how it turned out.

“It’s not the kind of box-office success we were hoping for, but it’s a sad day if we can’t support this kind of producer and this kind of talent,” he said.

Still, he conceded that the film’s performance will give his studio pause in regard to future development.

“We’ve made our share of adult dramas, and we’ll be very careful going forward about which ones we make and at what price point going forward,” he said.
x
Looks like you're enjoying reading