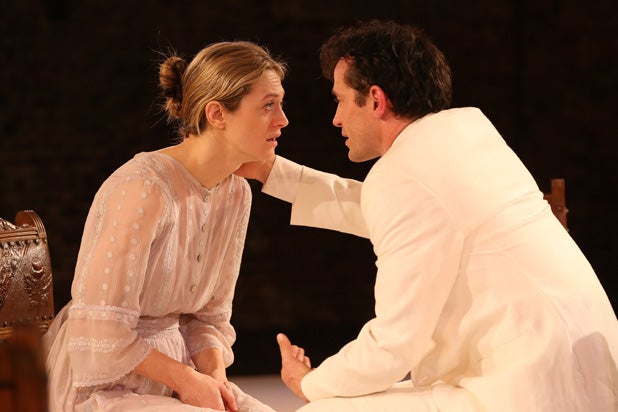 Jack Cummings III’s direction of Tennessee Williams’ “Summer and Smoke” makes clear the play’s strengths, as well as its many weaknesses. On the plus side, this revival, which opened Thursday at Off Broadway’s Classic Stage Company, brings two compelling performances to the stage: Marin Ireland’s repressed Alma Winemiller, the daughter of a Mississippi minister, and Nathan Darrow’s libertine John Buchanan Jr., the son of the town doctor who lives next door. The two characters starkly embody the eternal struggle between body and soul that’s at the core of almost any Tennessee Williams drama.

After the back-to-back Broadway successes of “The Glass Menagerie” and “A Streetcar Named Desire,” Williams took a tumble in 1948 with the world premiere of “Summer and Smoke,” which closed after a short run. A 1952 revival starring Geraldine Page and directed by Jose Quintero at the newly founded Circle in the Square resuscitated the play’s reputation, and in the process initiated the Off Broadway movement in theater.

The dynamic of Alma and John’s relationship is similar, but not identical to Blanche and Stanley’s in “Streetcar.” John’s much smarter and Alma’s much less damaged, at least in the beginning. In other words, their adversarial discourse shoots off verbal fireworks that are among the finest (and funniest) Williams ever wrote.

In the opening scene, John criticizes Alma for being mannered and affected. Ireland takes that criticism to heart to make her Alma very affected and mannered, as if the good-looking satyr next door were the ultimate arbiter of manners in small-town Mississippi. Fortunately, she soon relaxes her voice and hands enough to find the character’s strong core of resolve, and often ends up making far more sense than the intellectual stud she finds herself inexorably drawn to.

In her review of the 1961 film version starring Page and Laurence Harvey, Pauline Kael objected to Williams’ take on female virtue and frailties, especially the scene in which John invites Alma to a cockfight and she gets her crisply starched bodice splattered with blood. If that’s what it takes to showcase a maiden’s repression, Kael wrote, “Carry me back to virginity.”

There’s no rooster blood in Cummings’s staging, but the beauty of Ireland’s performance is that she resists becoming hysterical. She goes toe to toe with the very understated Darrow, and seems well on her way to proving the superiority of spirit over flesh.

What derails Alma and John’s chaste love story is Williams’ penchant to overdramatize. Gore Vidal, who wrote the screenplay for the playwright’s “Suddenly, Last Summer,” once commented that Williams sometimes went overboard with his theatrical effects. Vidal was talking about cannibalism.

In “Summer and Smoke,” it’s another kind of overwrought violence that forces John to re-examine his life and see the value in Alma’s virtue. No sooner is a character named Papa Gonzalez (Gerardo Rodriguez) introduced — he’s the father of Nathan’s fiancée, Rosa (Elena Hurst) — than the Mexican ends up shooting Dr. John Buchanan Sr. (Phillip Clark).

When he wrote “Summer and Smoke,” Williams must have known W. Somerset Maugham’s short story “Rain” (later a famous play) and possibly Jules Massenet’s opera “Thais,” two works in which the male and female leads essentially switch places in the moral universe. Although there’s violence in both “Rain” and “Thais,” it doesn’t directly lead to the characters’ respective conversions.

Cummings’ direction in no way softens, disguises, or attempts to deconstruct the crude mechanics of Williams’s plot. John’s involvement with a Latina is the height (or bottom) of the young man’s degradation in this production, which suddenly turns into a Met Opera staging of “Carmen” from the 1950s. Even Rosa’s costume and music are Spanish, not Mexican.

The other supporting characters are equally stereotypical: All three fathers are tyrants and the townspeople are stupid. Cummings gives each of these individuals his or her moment to shine on stage, where the text might be better served if he treated them all as what they are: one big chorus.

At times, the direction is Ivo van Hove Lite. In 1999, the Belgian director staged a much-panned but very enlightening production of “A Streetcar Named Desire” at the New York Theatre Workshop. The stage was bare except for the one thing usually left off stage in this play: the bathtub. Cummings also uses a bare stage and eschews props, but unlike van Hove’s staging, the “Summer and Smoke” actors mime (badly) and are stuck in turn-of-the-century costumes. It’s a mish-mash.

Only when Ireland and Darrow are on stage alone — and they are for long stretches of magnificent dialogue — does this “Summer and Smoke” actually catch fire to give glimpses of a play worth staging and seeing.

The revival is a coproduction between CSC and the Transport Group.