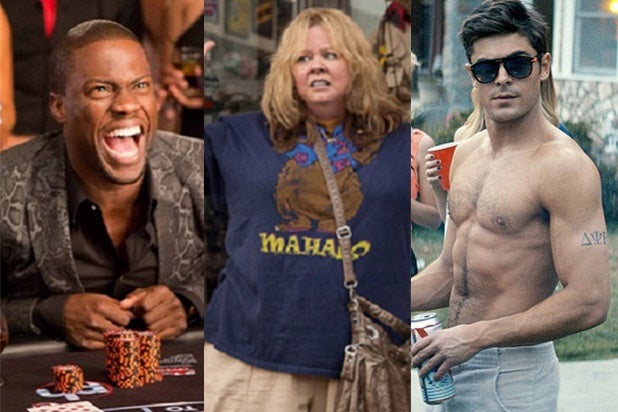 That’s because other than animated fare and Wes Anderson’s quirky “The Grand Budapest Hotel,” a comedy movie hasn’t connected at the box office since “Ride Along,” and that came out in January. A few have tried, but “Tyler Perry‘s The Single Moms Club” misfired, Jason Bateman‘s “Bad Words” underwhelmed in its wide release and, last weekend, Marlon Wayans’ “A Haunted House 2” failed to match the original film’s opening.

But  starting Friday, things are about to change in a big way. Fox’s PG-13 “The Other Woman,” starring Cameron Diaz and Leslie Mann, kicks off a full-on assault on moviegoers’ funny bones that won’t let up until August.

It’s nice that moviegoers will finally have some comedy options amid the superhero fare of summer, but Hollywood is cramming a lot of laughs into a tight window. It’s possible all that competition will be too much and create a situation similar to that of last summer, when a glut of animated movies caused several to underperform.

On May 2, Focus Features rolls out the Elizabeth Banks rom-com “Walk of Shame.” Universal’s “Neighbors, with Seth Rogen and Zac Efron, lands on May 9 — the same day as Sony’ s “Mom’s Night Out” — and John Favreau’s “Chef” from Open Road.

On May 23, Adam Sandler and Drew Barrymore open Warner Bros.’ “Blended,” and the next week, Seth MacFarlane’s cowboy romp “A Million Ways to Die in the West” debuts for Universal.

Getting the idea? That’s six releases in May alone; Universal even has two R-rated comedies — “Neighbors” and “A Million Ways to Die” — opening three weeks apart.

“Being sandwiched between ‘Neighbors,’ which looks strong, and before ’22 Jump Street’ could put ‘Million Ways’ in a tough spot,” said BoxOffice.com Vice President and senior analyst Phil Contrino. “That could be a problem for several of these movies, because they’re not going to have any time to find an audience if they don’t connect right off the bat.”

Kevin Hart’s “Think Like a Man Too” and “22 Jump Street,” from “The Lego Movie” team of Phil Lord and Chris Miller, follow in June from Sony — just one week apart. And Melissa McCarthy’s “Tammy,” Rob Reiner’s “And So It Goes” and Jake Kasdan’s “Sex Tape” all arrive in July.

Is it possible the box office could feel the equivalent of a side ache from all that laughing?

“It might have made sense for one or two of those movies to come out in March or April,” said Exhibitor Relations Vice President and senior analyst Jeff Bock. “That would have taken some of the pressure off and there are plenty of comedies that have launched successfully in those months.”

He’s right about that last part, and with Hollywood’s unofficial “summer” starting earlier, it stands to reason the prime comedy window could as well.

Recent April openers “Forgetting Sarah Marshall,” “Baby Mama” and “What Happens in Vegas” all did well at the box office. Another alternative would be to go out later in summer, which worked well for R-rated August releases “Superbad,” “Tropic Thunder,” “40-Year-Old Virgin” and last year’s Jennifer Aniston hit, “We’re the Millers.”

The lure of summer is that there are more potential moviegoers with free time, when kids are out of school and adults take vacations. But there’s also more competition, so there’s risk involved.

Last year, Fox realized early on that its Melissa McCarthy-Sandra Bullock buddy cop comedy “The Heat” was going to be a hit, so they moved it from a less-crowded April release to June 21, the height of summer. That worked out, to the tune of nearly $230 million at the worldwide box office.

Sony scored big last March, with the Jonah Hill-Channing Tatum TV remake “21 Jump Street.” The film made $200 million worldwide — on a $40 million production budget — but the studio will release the sequel in June, one week after it opens “Think Like a Man Too.”

The original “Think Like a Man” was made for $12 million, opened in April 2012 and took in $96 million. The comedy from Tim Story and Will Packer played very well with African-American audiences, and that’s a demographic target for the sequel.

“Both of these movies have great DNA, a lot of good will from the first films and a ton of good buzz right now,” Sony Distribution Chief Rory Bruer told TheWrap, who doesn’t see the proximity as a problem. “They’re bigger and better than the originals, so we’re very confident they’re going to realize their potential.”