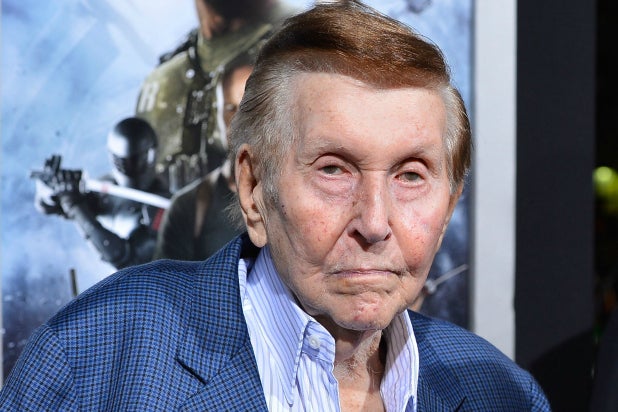 The Sumner Redstone case involves a lot more money than most of the cases that come before judges at Norfolk Probate and Family Court, 20 miles outside of Boston.

If you look up the courthouse on Google maps, you’ll find a nearby interstate and Salvation Army building — as well as “customer” reviews from dads not happy with how their family court cases broke.

“If you have a penis, you’re screwed,” reads one of the one-star reviews.

It isn’t the most likely place to find 22 lawyers in designer suits arguing over a 93-year-old billionaire’s fortune. Except for one thing: The Redstone case has turned into just another ugly family feud.

When the lawyers left Tuesday, the regular litigants who remained in the hallways, people wearing sneakers and sandals to court, waited for someone to call their names to resolve their own family dramas. The 22 Redstone lawyers almost never talked about money in court — they’re fighting over his care, you see.

But the regular people talked about money a lot. One man mentioned a friend who was “makin’ a killing” in a new job at a hotel. A woman patiently answered questions about whether her ex contested paternity of their daughter and whether he was working. (“I don’t know.”)

Also Read: Sumner Redstone Lawyer: Only His Cursing Is Easy to Understand

Probate Judge George Phelan, who is ruling in the Redstone case, made a point of mentioning money, too.

“I grew up in a housing project lucky to have a quarter in my pocket,” he told the 22 lawyers. “So I’m trying to grasp the concept of billion with a B.”

What is the case even doing here? Why isn’t it in Los Angeles or New York? Because Redstone is from Boston, despite his current Beverly Hills address, and his fortune grew from the chain of Massachusetts movie theaters owned by his father.

Phelan will rule on a range of issues. They include whether Redstone must undergo a medical exam to determine his competence and whether the case belongs in Massachusetts (where Redstone established it) or closer to the Beverly Hills estate where he gets round-the-clock care.

The judge spoke in a soft voice and listened patiently to the attorneys who various wings of the Redstone family, all of them very worried about his care.

They were all at the courthouse Tuesday because Viacom CEO Philippe Dauman and director George Abrams have been removed from the trust that will oversee Redstone’s empire if he becomes incapacitated or dies.

Too late, say Dauman and Abrams. They say he’s already mentally incapacitated and that his daughter Shari, from whom he was long estranged, has taken advantage of his ailments to sweep in, pull his strings and have longtime confidantes Dauman and Abrams removed. The trust controls Viacom and CBS, just two of the companies Redstone took over during his long run as a media mogul.

But Redstone is a man who brought Boston brusqueness to Beverly Hills. He was known for wearing ill-fitting off-the-rack suits even as he orchestrated hostile takeovers. (His desire for greatness took off after he barely survived a fire at a hotel, started by a bus boy who had just lost his job there.)

The case lets a judge from a Boston suburb decide the fate of a fortune built in Southern California lunches and New York City hotels and boardrooms. Maybe Redstone wants it that way.

He’s the one who placed his trust in Massachusetts.