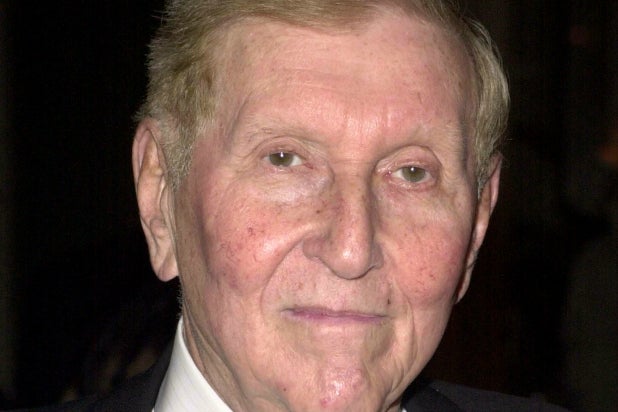 Ninety-three-year-old Sumner Redstone has such a severe speech impediment that he’s almost impossible to understand except when he unleashes vulgarities — “which he can speak remarkably clearly,” one of his attorneys told a judge Tuesday.

Attorney Robert Klieger represented Redstone in the Viacom mogul’s legal fight with ex-girlfriend Manuela Herzer, and his claim about Redstone’s voice was certainly accurate in that case. Redstone gave testimony that was largely incomprehensible, except when he called Herzer a “f—ing bitch.”

Klieger says that despite Redstone’s vocal troubles — which Klieger said are partly the result of a throat problem that also requires a feeding tube — Redstone is actively interested in the fate of his holdings and takes a day-to-day interest in the performance of those who oversee them.

Twenty-two-lawyers gathered in a courtroom in quiet Canton, Massachusetts, to argue over whether Redstone was in his right mind when he — or someone acting on his behalf — removed Viacom CEO Philippe Dauman and director George Abrams as trustees in the trust that will control his vast empire if he becomes incapacitated or dies. The trust will control both CBS and Viacom.

Klieger said he eventually learned to understand Redstone, sometimes with the help of an interpreter, and that Redstone indicated that he no longer trusted Dauman or Abrams. Redstone believed Dauman had “done a poor job running Viacom and was not listening to his wishes” that Viacom not sell Paramount Pictures, Klieger said.

Lawyers for Dauman and Abrams contend that Redstone is mentally incapacitated and that his daughter, Shari, is taking advantage of his poor health to vote out his most trusted confidantes.

Beginning 30 years ago, Dauman helped guide Redstone through a series of hostile takeovers, often in 5 a.m. phone calls that started Dauman’s long days. Abrams advised both Redstone and his father, whose chain of movie theaters evolved into Sumner Redstone’s empire.

The ousted trustees’ attorneys contend that Sumner Redstone cannot stand, speak, eat or read. They said he would need to be institutionalized were it not for the round-the-clock care he receives at his Beverly Hills home.

But Klieger told probate Judge George Phelan that Redstone’s health is not as bad as they argue.

“He’s not a prisoner in his house,” Klieger said.

The judge gave no indication when he would make his rulings.

“I grew up in a housing project lucky to have a quarter in my pocket, so I’m trying to grasp the concept of billion with a B,” he said.