Park City, brace yourself for the “Hollywood jet set.” Literally.

On the opening day of the 2016 Sundance Film Festival Thursday, a select group of 160 film industry buyers, bosses and big shots will fly to Utah together on a special Delta Air Lines flight.

“The ‘Delta Festival Shuttle’ is a private event at 30,000 feet,” Ranjan Goswami, VP, Sales-West told TheWrap in a statement. “(It’s) akin to a member’s club o fcreatives in the sky.”

It’s also a members’ club with perks: That cry of joy coming from seat 24F means a raffle winner is headed to Beijing (or Paris or JFK, on Delta of course) and even if your seat isn’t called for one of the vacations, there’s a gift bag on each to one-up the traditional sick bag that normal flights offer.

It is the type of insular, clubby, experience-within-an-already-elite-experience that Hollywood eats up, which they will at a pre-flight brunch at Rock & Brews in the terminal.

In a haze of a ineffective swag strategies that lure celebrities, their gatekeepers and influencers to various festival and award show lounges to foist questionable products on them that nobody really needs, this entertainment marketing strategy proves smart: Give the people you’re trying to sell to exactly what they need, when they need it, in an environment of peers that amounts to a “show” instead of a “tell.”

Back on the ground in Park City this week, there are many fewer swag suites than in years past. From a perusal of the offerings, here are a few of the cool and quirky items that may be worth a talent’s time to take a photo with. 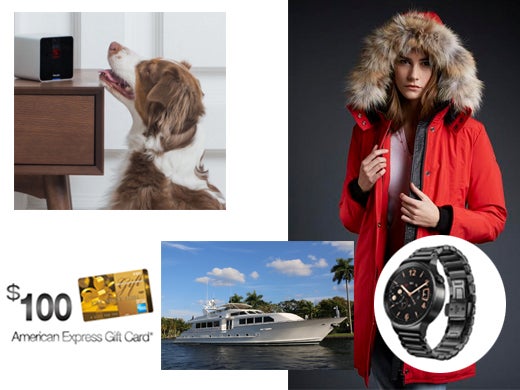 Choices Recovery is gifting in $100 increments and “will give major name talent multiple cards when they sit down for an interview in the “Choices Recovery Media Center hosted by Courtney Sixx.” (At the EcoLuxy Lounge.)

Internet Connected Pet Cameras:
Web cameras that let you play your pet remotely by making them chase a laser while you watch. (From Petcube, normally $200, at Kari Feinstein’s Style Lounge.)

Yacht  Gift Certificates:
$500 off a one-day yacht rental in Cuba, the Hamptons, the Bahamas or South Florida. (From LuxuryDayCharters.com, at the EcoLuxe Lounge.)

SmartWatches:
Watches that tout how much they look like a real watch (“not Apple” they say): (From Huawei, normally $350-$600, at Kari Feinstein’s Style Lounge.)

Retro Members Only Gear:
At the Toyota Mirai Music Lounge.