For a director with the pedigree of animator Don Hertzfeldt, studios should be lining up with offers to direct a feature film.

Hertzfeldt, a two-time Oscar nominee, is listed among the most influential animators of all time. In 2014, “The Simpsons” invited him to make the strangest couch gag ever. And this year, Hertzfeldt is returning to Sundance, where his short film, “World of Tomorrow Episode Two: The Burden of Other People’s Thoughts,” will be playing on the festival’s opening night after that film’s predecessor won the Grand Jury Prize at the fest in 2015.

Over a 20-plus year career, Hertzfeldt has established a cult audience online who follows his every move, allowing the animator the freedom to make whatever movie he wants, at the pace that he wants.

“The only reason I’ve survived so long is this audience,” he said in an interview with TheWrap. “I’ve never had studio backing or even a big grant. I still don’t have a publicist … but I’ve reached the point where I can just say, ‘Hey I made this new thing, you can go see it over here,’ and enough people show up.”

Hertzfeldt animates with crudely drawn stick figures and a surreal story structure, with the randomness and absurdity that would become the stuff of webcomics and internet humor everywhere. But he manages to blend the insanity with a surprising dose of humanity. In his twisted comedy “I Am So Proud Of You,” he reflects on mental illness and sobering, yet darkly funny tragedies such as “a quiet, unassuming man who was eating an onion one day when he was cut in half by a train.”

Two years after graduating from the film school at UC Santa Barbara, Hertzfeldt rose to prominence with his 2000 film, “Rejected.” Drawn entirely on his own, the short depicts an increasingly bizarre and hilariously shocking collection of rejected advertisements including a happy little cloud that suddenly starts shrieking, “My anus is bleeding!” And yes, this movie got an Oscar nomination. 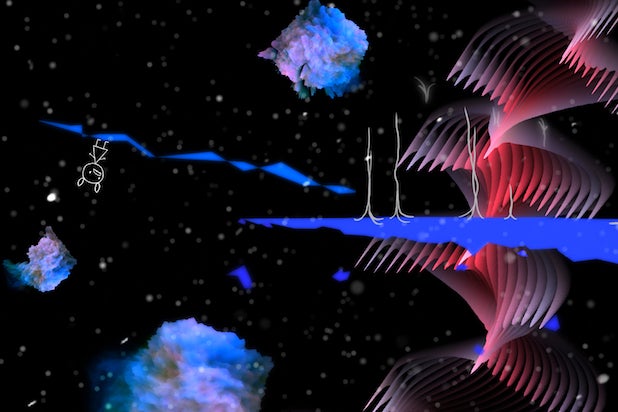 The film went viral before the concept of going viral was a thing. Fans bootlegged it at midnight screenings and would spam their friends’ emails with a compressed video file as though it were an actual email virus. Animators at Adult Swim and others have cited Hertzfeldt as a major influence on their work, but he’s not sure if he deserves, or even wants, the credit.

“As a writer, I had never wanted to do what everyone else was doing, and suddenly it seemed like everyone else was doing some version of me. So I felt sort of pushed away from my own work — pushed away from my own sense of humor, in a weird way — because it got to feeling so repeated and stale out there that I felt like I couldn’t do anything in the same vein as ‘Rejected’ ever again,” he said.

“World of Tomorrow Episode Two” depicts a future where a clone named Emily travels back in time to meet the original Emily when she’s only a toddler. The film is dazzlingly colorful and philosophical, revealing an abstract, two-dimensional, geometric future that serves as a background to his simplistic characters. The short clocks in at less than a half-hour, and yet it has significance and wonder that can be unpacked and analyzed for days. Hertzfeldt has toured the film ahead of its Sundance screening and made it available for rent on Vimeo, and he’s been humbled by how audiences have read meaning into the film he never imagined.

“I visited a classroom with ‘World of Tomorrow’ and the teacher was leading a discussion about it,” Hertzfeldt said. “A little kid talked about the solar robots on the moon and how they’re always moving forward, afraid of darkness and death, but they don’t know why. They’ve only been programmed to be afraid of those things, he said, just like people are. And I thought ‘Whoa, that’s really perfect and how in the hell did that never actually cross my mind before?'”

Hertzfeldt said he would work within a traditional studio setting if he could retain control of his work, but the success he’s found and the avenues for distribution that have become available to short filmmakers suggest a hopeful model for others who wish to follow in his footsteps.

“In the ’90s, there were maybe one or two weird or sleazy animation festivals that could bring your stuff into theaters. And after that maybe you’d hope that MTV might want to air something. That was about it. You couldn’t afford to say ‘no’ to very much,” Hertzfeldt said.

“Distribution for shorts seems like a dream now, there’s new options every time I turn around. Running times have also been sort of thrown out the window; everything doesn’t need to fit into the 90-minute container anymore,” he continued. “With audiences watching everything at home, they’re able to bounce between an eight-hour miniseries to a 10-minute short, it doesn’t matter; they just want to see something good.”

Both Disney and Pixar have left a mark on animation that no other studios can match, and for both, their origins can be traced to animated shorts. Pixar has accompanied all of its feature films since its second feature film ("A Bug's Life") with opening shorts, and Disney has recently followed suit with shorts that range from groundbreaking experiments to revitalization of their most classic characters.
View In Gallery
x
Looks like you're enjoying reading