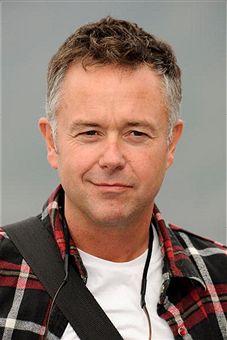 Audience members at a screening of "The Killer Inside Me" took director Michael Winterbottom to task for the film’s excessive violence toward women, and star Jessica Alba wasn’t around to support him at the Q&A session — she had left halfway through the film.

In "Killer," characters played by Alba and Kate Hudson are repeatedly punched and kicked bloody by Casey Affleck’s character, small-town deputy sheriff Lou Ford. In one scene, a brutal beating goes on for several minutes.

According to a Toronto Star report, Winterbottom appeared rattled when the lights came up on the Monday screening and the audience began assailing him with questions about why the violence was necessary. At the first screening Sunday night, a woman reportedly demanded to know why Sundance officials let the film into the festival and stormed out.

Winterbottom argued that his film, based on a 1952 pulp novel by Jim Thompson, is "not the real world. It’s kind of a parallel version of the real world. … I was taken in by that world."

Alba left the Sunday screening midway through and didn’t attend the question-and-answer session that followed, but a rep for the film at Sundance downplayed her departure.

"She saw the film last week in Los Angeles. She came here just to support Winterbottom and the film and was never planning on sitting through it," the rep explained.

Alba did not attend Monday’s screening. Neither Hudson nor Affleck was in Park City.