A stack of Sundance regulars (Carey Mulligan, Ethan Hawke, Common, Elle Fanning, Jack Black, Armie Hammer) and some more infrequent festival talent (Keira Knightley, Usher, Jonah Hill) will soon be invading Park City, Utah, as the festival begins on Thursday, January 18. We will be right there with them.

For Sundance 2018, The Wrap is riding shotgun with Acura. The auto company is the presenting sponsor of the 2018 festival and will present both the U.S. Dramatic and Documentary audience awards.

In addition to hosting TheWrap’s interview suite and photo studio, the wheels of the fest are sponsoring this very Party Report to help deliver insider party and event coverage. 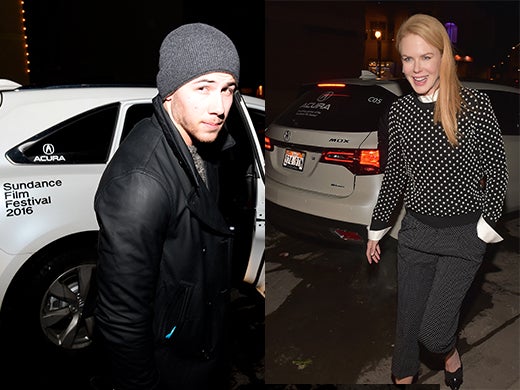 If you’ll be in Park City, look for the new immersive Festival Village footprint located on Swede Alley.

Top talent, filmmakers, and creative ensembles will pass through providing a steady stream of #CelebSightings. (Follow along on @SundanceParties and @TheWrap on Instagram). 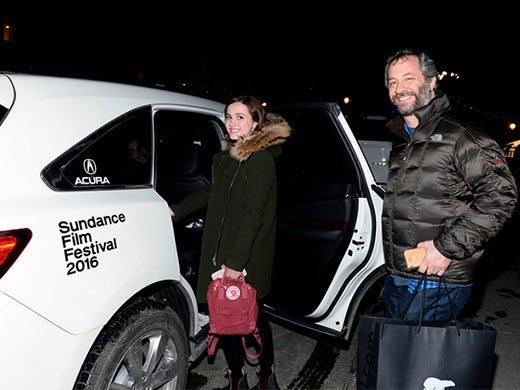 Maude Apatow and Judd Apatow at a prior Sundance.

For festival attendees who care more for after-parties than midnight showings — a not insignificant delegation of the industry — consider this the social scene lineup reveal.

Here is The Party Report’s curated list of the top invites, select guest lists, and most sought after invites people are seeking in their inboxes. 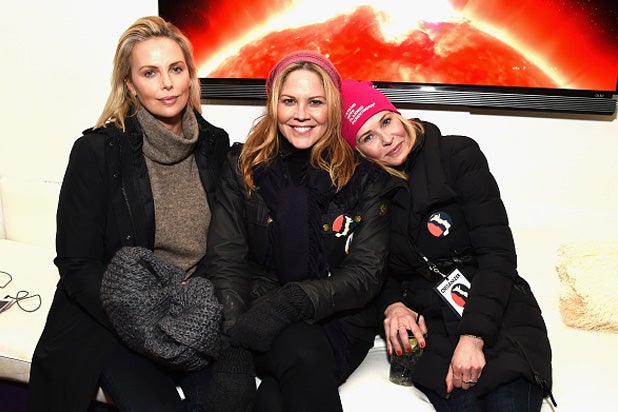 Note: This is not a comprehensive guide to the parties in Park City. Those laundry lists of hundreds of official and mostly unofficial gatherings are floating around the industry.

What follows is a curated cull of of choice events. If you see an invite or event that catches your eye, feel free to tip The Party Report at the end of this long piece. 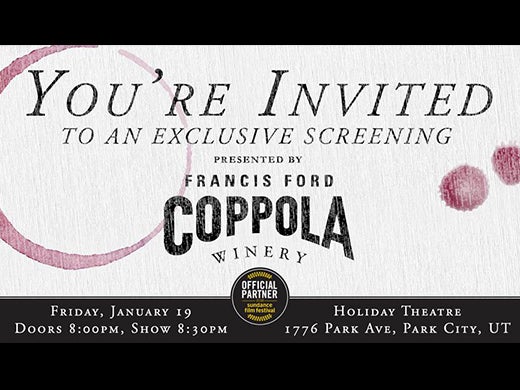 Cinephiles, you are not going to have to wait long for film prizes to begin flying in the mountains.

The six-time Oscar winner’s family winery is the exclusive wine sponsor of Sundance and will be the only (non-sparkling) wine poured at the upcoming 90th Oscars and the Governors Ball.

Here, on the first full day of the festival, Roman Coppola will share the top five films of this shorts festival and reveal the winner. I am going to be emceeing this screening at the Holiday and invited guests over 21 (festival credential or not) can come pick up first-come first-serve tickets beginning at 8 p.m. Bonus: This is one of the only screenings at the festival where wine is permitted inside the theatre. Cheers!

The night will conclude with a premiere viewing of the Tim Burton-esque branded film “The Red Stain” directed by Rodrigo Saavedra. Let’s hope Saavedra’s title refers only to the onscreen action and not any errant dribbles on to your starchy white parka. 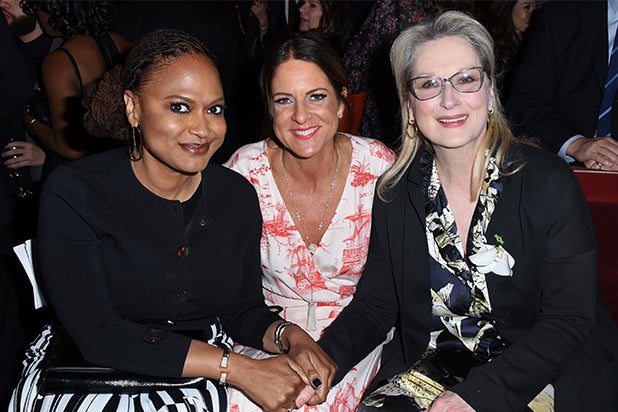 Throughout the festival, official partner Stella Artois is putting a spotlight on female-led stories, casts and filmmakers. Those ubiquitous chalices will be raised to those using film and media to ignite social change.

On Friday night (Jan. 19), Chloe Sevigny’s “Lizzie” cast arrives for a late night post-screening party. The next day, Women in Film continues a big opening weekend by announcing its Film Finishing Fund winners before hosting a panel with leading women producers and directors on “The Road to 50/50,” the initiative to achieve gender parity throughout the industry. 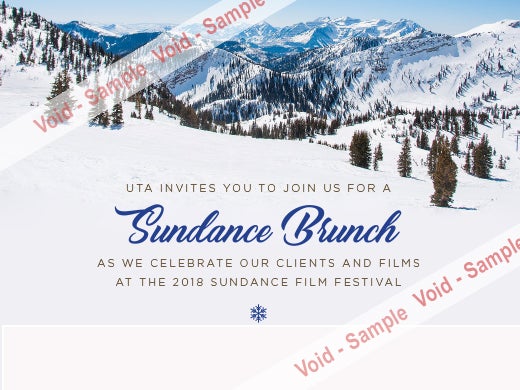 These guys have their claws deep in to Sundance, beginning with the “Delta Festival Shuttle” that flies a commercial planeload of industry bigshots to Utah together every year. 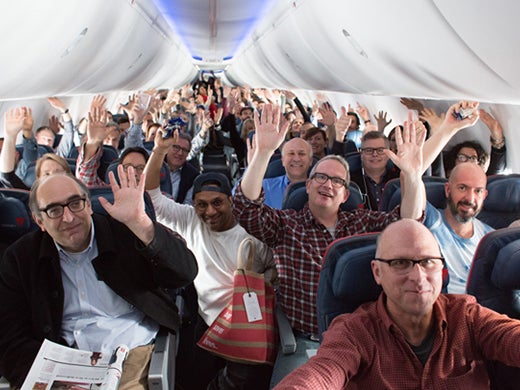 A surprise #Sundance performance by #SelenaGomez at the #greygoosebluedoor party for her film #Rudderless! What do y’all think, #Selenators?

(Above, from 2014, an all time highlight from the Grey Goose space.)

On Sunday (Jan. 21) at 9 p.m., I predict a line snaking down Main St. for the after-party for “Burden.” Garrett Hedlund, Forest Whitaker and Usher are scheduled to celebrate inside before a performance by Common.

Other highlights include the recent Golden Globe and Critics Choice winner Laura Dern’s soiree for “The Tale” (Jason Ritter and Ellen Burstyn co-star) and the “Sorry to Bother You” bash with a buzzy cast. “Atlanta” star Lakeith Stanfield, Tessa Thompson, and Armie Hammer all topline Boots Riley’s directorial debut.

Find out who will be going to the Super Bowl two weeks later in (equally freezing) Minnesota. Craig’s, West Hollywood’s paparazzi magnet, caters the food. Remember that DirecTV boasts the Sunday Ticket relationship with the NFL and throws a massive pop concert on the eve of the Super Bowl each year, so this room is looking beyond Park City. 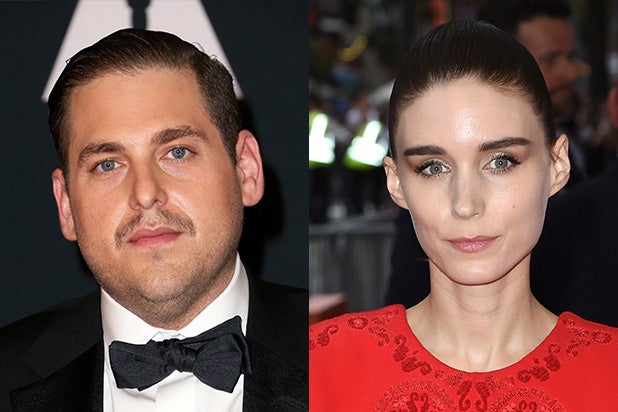 Jonah Hill, Rooney Mara, Joaquin Phoenix, and Jack Black are all expected at the late night premiere party for Gus Van Sant’s “Don’t Worry He Won’t Get Far on Foot.”

This one goes until 2:30 a.m. on the first Friday. Earlier that night, the Pauls (Rudd and Giamatti, not Jake and Logan) will headline the “Catcher Was a Spy” party. Jake Gyllenhaal, Carey Mulligan, Peer Dinklage, Elle Fanning, and Suki Waterhouse are all expected to pour through the space on opening weekend.

Despite “Monster’s” serious storyline of “American injustice” for a black teenager caught up in a deadly crime, the offscreen scene around this entrant in the U.S. Dramatic Competition is buzzy.

Anthony Mandler has directed 15 videos for Rihanna (as well as Taylor Sift, Jay Z, and Drake, among others) and perennial festival creative John Legend is an executive producer in a producer corps that includes Mike Jackson (“La La Land”) and Tonya Lewis Lee (“She’s Gotta Have It”). Jennifer Hudson and Jeffrey Wright are in the billing block. Expect a “surprise performance” and a crowded room at this one.

Reviewing the two preceding entries in this preview, if you get an invitation to anything at this space, you should go. 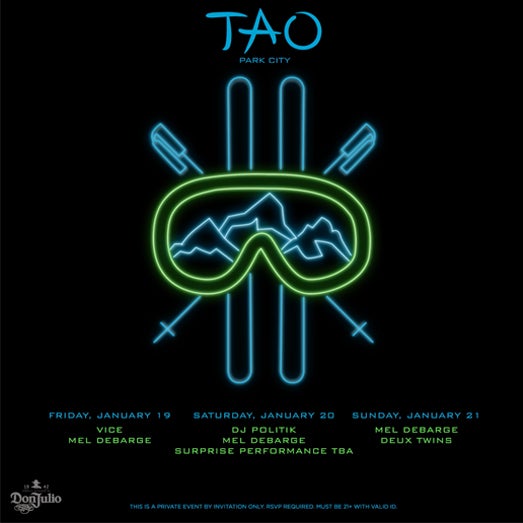 Since the nightclub pop-up first moved off its longtime perch under Main Street last year, the dominant late night social hub at the festival has colonized an entire block in Hollywood.

That took its relationship with Hollywood — the industry, not the zip code — to the next level. 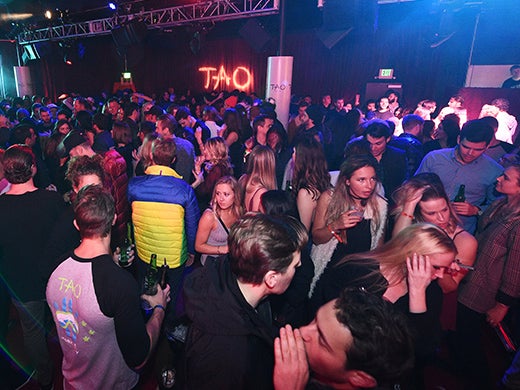 Speaking of “taking it to the next level,” Tinder is getting in on the action as a sponsor providing a “heated outdoor lounge.” It’s pretty dark in there to begin with, so I’m not sure how or why this is necessary except for waiting for [TAO EXECUTIVE NAME REDACTED] to maybe grant you and your crew access to get inside.

Tequila Don Julio, who have primed relationships with nearly all of the DJs on the bill (above), will grace the VIP tables. 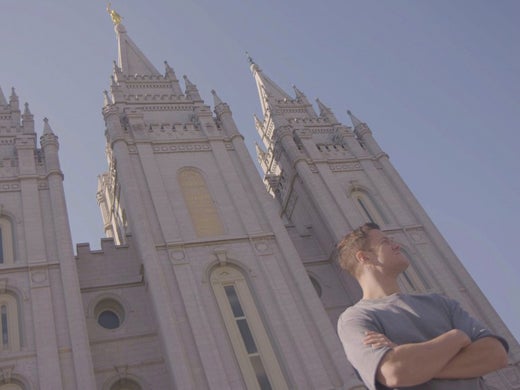 Dan Reynolds dives in to the Mormon church’s treatment of LGBTQ youth in “Believer.”

“Believer” documents the Mormon rocker’s investigation of how the Mormon church approaches the LGBTQ community and his creation of LoveLoud, a festival designed to bring awareness and fundraiser for LBBTQ youth. 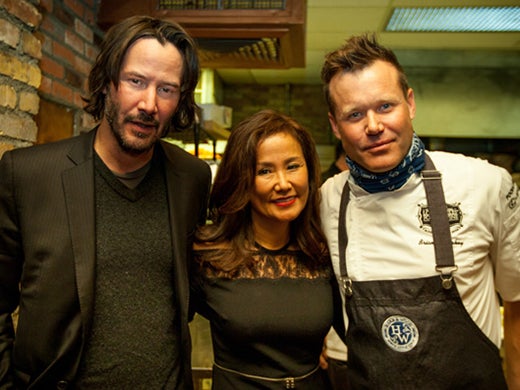 An official festival partner, Mimi Kim hosts a celebration of “food, culture, and people in an exclusive setting.”

Unpacking the glossy aura of “Top Chef” for a boisterous crowd every night, the multi-course dinner party is “event dining” on Main St. Some Angelenos got a sneak preview of this year’s menu at Kim’s L.A. house on Jan. 9, but hundreds more will taste chefs Luigi Fineo (Osteria Venice West) on Friday Jan. 19, Chef Beau MacMillan (Sanctuary on Camelback Mountain Resort and Spa) on Sunday Jan 21., and Chef Brian Malarkey (Herringbone La Jolla, Herringbone Santa Monica) who joins ChefDance for a special evening in support of The Art of Elysium on Monday, Jan 22. 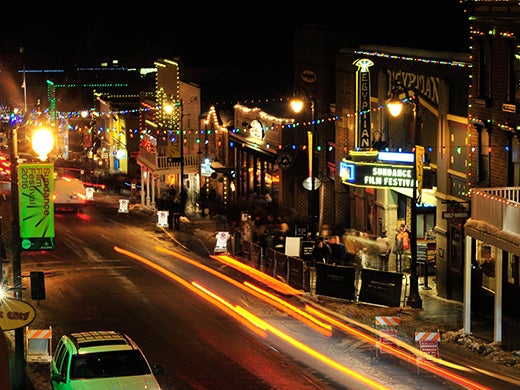 Unless otherwise noted, all events are private and by invitation only. Standing out in the cold trying to text someone inside to get you in is a real bummer. Get your RSVPs in advance, don’t be a creepy crasher, and arrive respectfully. #SundancePSA.

TheWrap’s Party Report at Sundance is a partnership with Acura, the presenting sponsor of the 2018 Sundance Film Festival. Keep up with real-time images of the scene in Park City on @SundanceParties on Instagram).

The Party Report and this writer are not affiliated with nor endorsed by the Sundance Institute or the Sundance Film Festival.