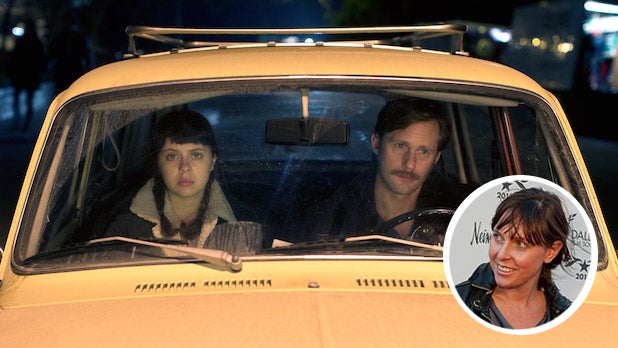 Miranda Bailey is a veteran actress, writer, director and producer whose company Cold Iron Pictures just produced Marielle Heller’s “Diary of a Teenage Girl,” which premiered to strong reviews at Sundance on Saturday.

Bel Powley stars as the title character, who has an affair with her mother’s boyfriend, played by Alexander Skarsgard. Kristen Wiig co-stars in the film, which is being sold by UTA (domestic) and K5 (international).

Bailey spoke to TheWrap in advance of the festival about the film and her company’s goals, as well as hot topics like VOD and being a woman in a male-dominated industry like Hollywood.

How did this project come across your desk and what made you want to be a part of it?
The project came to us simultaneously from UTA and Caviar. We had met with Caviar a week earlier and were figuring out projects we’d work on together, but this one came to us at the same time, and it was a brilliant script based on a graphic novel by Phoebe Gloeckner, so we thought, ‘What about this one?’ Kristen was already attached and Marielle had already adapted the book as a play that she produced, directed and acted in in New York. It was definitely one to roll the dice on. The project was a participant in Sundance’s writing and directing labs, so it’s hard to go wrong there.

What made you want to take a chance on a first-time filmmaker like Marielle, and how did you end up casting Bel?
It’s something Marielle has lived with for a really long time. You can trust someone when they have vision, so while yes, it’s her first feature, she knew exactly what she wanted to do with it and that’s extremely rare. Marielle told us she wanted Bel Powley. She was hoping to get her first choice, but no one knew who she was. I thought she looked perfect, but you never know. It turned out great because she’s fantastic.

In your own words, what is “Diary of a Teenage Girl” about?
It’s about Minnie, a teenage girl living in San Francisco in the ’70s, and her mother is raising her and her sister alone. Her mother is hanging out with some precarious people and one of these guys — her boyfriend — comes on to Minnie, and she comes on to him, and they have this affair behind her mother’s back. It’s about what it’s like to be a teenage girl and to have the sexuality of a teenage girl before you’ve experienced love or a relationship. You know, the angst we all go through as teenage girls — What if he loves me? What if he doesn’t? — that kind of thing.

She thinks of her mother as some other woman he’s dating as opposed to her mom, which leads to some uncomfortable moments in a really good way cinematically. It doesn’t matter if it’s an older man or a boy in your same class, teenage girls and adult women have the same anxieties about wanting to be loved and desired. It’s very relatable. Eventually, Minnie realizes it’s not about whether or not someone loves you, it’s how you feel about yourself. I wanted to be part of this message, and I also wanted to support a female filmmaker.

Tell me about the transition from Ambush Entertainment to Cold Iron Pictures. Are you an army of one over there or do you have a staff?
I was a partner in Ambush with Matthew Leutwyler, but we went our separate ways. Cold Iron was the financing arm Ambush was using, so that entity became my own production company. The staff includes myself and Amanda Marshall, who is an executive producer on “Diary of a Teenage Girl” and was very hands-on throughout the process.

Do you two face any extra challenges in the industry as a production company run by two women?
We face the same challenges any production company faces, whether it’s run by a man or a woman; at the end of the day, can you find the money, and can you find the right projects? I mean, we’re doing the same thing that everybody’s doing, but I think the biggest challenge right now is the changing landscape in distribution and how the prices for movies seem to be much lower than when I got into producing 15 years ago, which means the price of making movies has gone down as well. Having to keep budgets down and underpay people or not pay people at all to create art — including yourself — is challenging, and so is selling films for a theatrical audience. If they’re not cookie-cutter, they need a more specialized distribution plan. I’ve never really made a cookie-cutter film.

Are you more likely to embrace a VOD release following the success of “The Interview” or is a theatrical release still the primary goal?
A little bit of both. That was a fluke situation that allowed everybody to agree that “The Interview” would be good to see day-and-date on VOD and get a small release, but the majority of filmmakers and their agents are still afraid of the day-and-date model, and it takes persuading to say you’re going to get more eyeballs on your movie these days [that way]. VOD is a second choice to theaters and a traditional window, but it depends on the type of movie you’re releasing. If you can say, ‘This should be day-and-date for these reasons’ and figure out a way to market the movie properly and what would benefit each film rather than the companies behind them, then why not? But it depends on a lot of factors like cast, title, placement and release date. It’s sad that the DVD market is going away.

Given the lack of female-driven stories in the marketplace and the success of movies like “The Hunger Games” and “The Fault in Our Stars,” would you say the timing is perfect for a movie like “Diary of a Teenage Girl?”
There’s always been an appetite for films about young women. The problem is that they’ve always been about teenage romance, and I don’t think that’s what this is. It’s a movie based on a graphic novel, and it’s more adult thematically. It’s a very commercial indie, and I think it’s going to be well-reviewed. Kristen Wiig’s performance is as equally great as her turn in “The Skeleton Twins.”

What kind of movies are you aiming to make at Cold Iron?
I just want to make movies that I’m personally passionate about. I spent a long time with Ambush trying to figure out a formula, or doing movies that I didn’t really love, but at the end of the day, it’s a really risky business and you put your heart and soul into these movies. If you can’t do that, it’s not worth it. I could relate to “Diary of a Teenage Girl” and knew it was something I wanted to do, and based on its cast and budget, it made sense to do it. “Diary of a Teenage Girl” was the first movie shot under Cold Iron. The second was “Time Out of Mind,” which is another movie with a message I believe in. I just want to be a part of unique films and make movies that are different.

That said, if a really amazing “Primal Fear”-type thriller lands on my plate, of course I’ll do it if I love it. We have a pretty unique slate moving forward in 2015, including  “Swiss Army Man,” which is this super-fun absurdist comedy from the Daniels (Dan Kwan and Daniel Scheinert) that is another Sundance lab project. We’re also doing Joseph Cedar’s first English-language movie “Oppenheimer Strategies” with Richard Gere and Charlotte Gainsbourg. Another one is “You Can Choose Your Family,” which I’m going to be directing. It came through the Imagine labs, so Karen Kehela Sherwood is co-producing that one along with Amanda Marshall.

Anything else you’re working on?
Well, I also finance and distribute movies via The Film Arcade, but the company’s day-to-day is run by Jason Beck and Andy Bohn. We’re doing “Song One” this month, and Film Arcade is planning to be very active at Sundance. All three of us make the decisions, but at the end of the day, they know what they’re doing more than I do in that realm. I’m still learning. I kind of wish I had done distribution first and producing second.