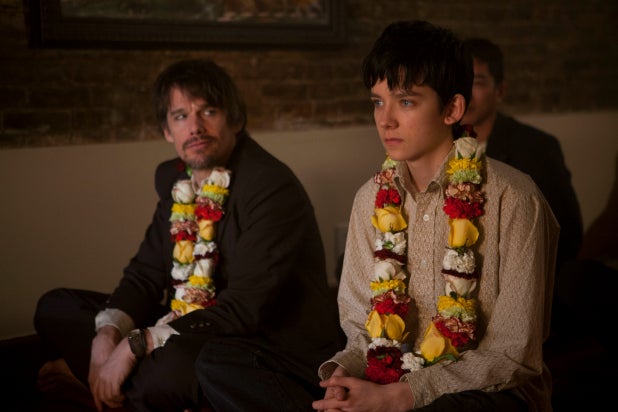 A bit of friendly advice to the producers of “Ten Thousand Saints”: Please, please, please get rid of the opening narration in which the protagonist observes that life is like a river. It’s the worst line of dialogue in the whole movie, and it starts the proceedings off with a cringe.

Luckily, the script (by directors Shari Springer Berman and Robert Pulcini, adapting the novel by Eleanor Henderson) gets better from there. After the death of his best friend Teddy (Avan Jogia, also appearing in “I Am Michael” at Sundance), disaffected teenager Jude (Asa Butterfield, “Ender’s Game”) leaves Vermont and goes to Manhattan to live with his drug-dealing dad Les (Ethan Hawke). Jude is smitten with Eliza (Hailee Steinfeld), the daughter of Les’ current girlfriend Diane (Emily Mortimer), but then it turns out Eliza is carrying Teddy’s baby.

Their journey involves Teddy’s half-brother Johnny (Emile Hirsch), a devoted Hare Krishna and part of the straight-edge hardcore scene in late ’80s New York City, who has his own reasons for wanting to marry the underage Eliza. Berman and Pulcini, making their strongest film since “American Splendor,” elicit great performances, but they also skillfully keep the film funny despite all the tragedies that keep befalling the characters.

Hawke, playing a wastrel-ish spin on the devoted dads he’s given us in the last two Richard Linklater movies, stands out, but it’s a great ensemble, including Julianne Nicholson, whose earth-mother role here couldn’t be further afield from her buttoned-down doc on “Masters of Sex.”

“Ten Thousand Saints” loses its way a bit in the third act, throwing in a clash between cops and homeless people in Tompkins Square Park that never successfully ties in with the main storyline, but this charmingly humane period piece sees two talented filmmakers getting their mojo back after major missteps like “Girl Most Likely” and “The Extra Man.”

Two riveting documentaries look at some legendary literary lions of the 20th century: My colleague Steve Pond has already covered the compelling “Best of Enemies,” a look at the William Buckley/Gore Vidal debates at the 1968 conventions, a film that’s equal parts dishy and historically-culturally contextual; it’s nostalgic for an era when a major network would give airtime to two users of multi-syllabic words while also pinpointing their contretemps as the launch pad for left-versus-right yelling pundits on modern TV news.

Much of the HBO documentary “Larry Kramer in Love and Anger” might seem familiar to anyone who’s seen “How to Survive a Plague” or watched “The Normal Heart” onstage or on cable, but it’s a mostly thorough and very reverent examination of the life of an essential writer and activist. We follow Kramer from his unhappy childhood through his career as a film executive and Oscar-nominated screenwriter (“Women in Love”) to his founding of Gay Men’s Health Crisis and ACT UP during the early years of the AIDS plague — Kramer always said “epidemic” wasn’t strong enough a word — to the modern day, where he battles health issues but continues to write.

Director Jean Carlomusto takes us into some of the less-traveled areas of Kramer’s life and career — the controversial but prophetic novel “Faggots,” the fact that his big paycheck for writing the musical flop “Lost Horizon” allowed him to tackle activist and theatrical pursuits — but the completist in me wanted to know more about Kramer’s relationship with his husband David Webster and about his little-seen play “Just Say No.” Nonetheless, it’s good to know that the life and work of someone as vital (and as full of righteous anger) as Kramer will be reaching a mass audience when the film debuts on cable in June.

There’s more to “The Summer of Sangaile” than its extraordinary cinematography (by Dominque Colin, “I Stand Alone, “L’auberge espagnole”), but it’s hard not to start there. If a dark horse like “Ida” could make its way into this year’s Oscar race in the cinematography category, whatever distributor picks up this lovely coming-of-age drama should aim for that goal for next year.

In the first Lithuanian narrative film to play Sundance, Sangaile (Julija Steponaityté) suffers from vertigo but is obsessed with air shows and stunt-flying. At one show, she catches the eye of the bubbly Auste (Aisté Diržiūté), and the two eventually fall into a passionate relationship, despite Sangaile’s habit of cutting herself. (She has 13 scars on one arm and 17 on the other; Auste tries to get her to stop after she’s made them match.)

Writer-director Alanté Kavaïté has a flair for visual storytelling; there are long stretches of little or no dialogue, but her camerawork — ranging from close-ups of faces, shoulders and other body parts to soaring shots above the tall trees that surround Sangaile’s house — tells us everything we need to know. By the end of the film, you’ll feel Sangaile’s vertigo whether or not you share the character’s fear of heights.

If there’s a downside to the film, it’s that it resolves itself more conventionally than some of the story’s more unexpected twists might lead you to expect. But that’s a minor quibble for a film that’s so visually and emotionally beautiful.