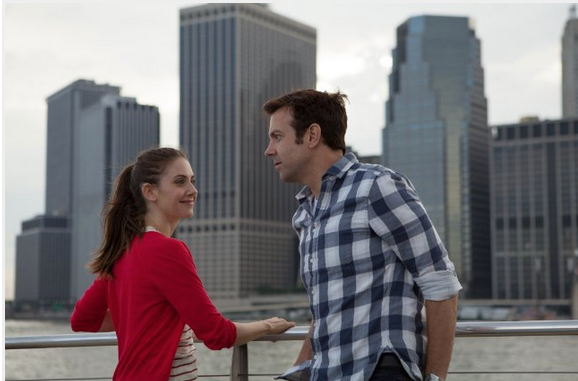 “Sleeping With Other People,” a romantic comedy for the 21st century, premiered at the Sundance Film Festival to raucous laughter and genuine appreciation on Saturday for its empathetic look at how love, sex and intimacy work these days.

The answer seems to be: it’s complicated.

In the story written and directed by irrepressible writer-director Leslye Headland, Jason Sudeikis plays Jake, a cocky young player with lots of sexual encounters, and Alison Brie is Elaine, a pre-med student obsessed with a lover (Adam Scott) who mistreats her and marries another woman.

She visits her lover at his medical office to break up with him for the umpteenth time, they have sex on his desk – “It’s all I think about,” she whispers – then she leaves and feels horrible.

Jake plays the typical hook-up game – sleeping with a woman, then never calling her.

The two connect at a sexual addiction meet-up, and decide to keep their budding friendship fully platonic. Yet the friendship turns into something far more intimate than any of the sexual relationships either is having, or had previously.

Headland told the crowd that she had written the film as “When Harry Met Sally for Assholes” – a look at how platonic love turns into a refuge for people starved for intimacy.

Regardless of the deeper meaning, the writing is razor sharp and the dialogue studded with delightfully kooky cultural references, such as “going Khaleesi” on a guy – a reference to the diabolical Game of Thrones character.

Asked during the q&a whether she thought men and women could be platonic friends, Headland was unequivocal: “No,” she shot back to the questioner. “I just don’t think so. I’m sorry, I just don’t.”