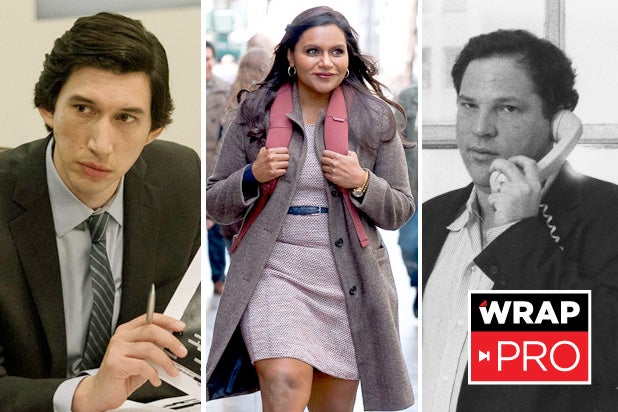 Sundance 2019 brought into sharp focus the two-tiered reality that now dominates the world of independent content.

It’s a story of the haves and the have-nots.

The haves are those giant tech-based companies like Netflix, Amazon and Apple that can plunk down many millions of dollars on a movie they like without a second thought.

The have-nots are everybody else — scrappy distributors who still do the Old Math: adding up the P&A costs, the ancillary rights like TV and international and, um, airlines to figure out how to protect their downside and maybe make a profit.

But there’s no such old-style nonsense for the tech giants — and Amazon is the colossus of choice at this year’s Sundance, blithely buying multiple movies for $15 million. Who does that? (Netflix, meanwhile, has barely been in the acquisitions game so far this year.)

“Late Night,” the broad comedy by Mindy Kaling and co-starring Emma Thompson, went to Amazon for $13 million on Day One of the festival. “The Report,” a gripping drama about the Senate investigation into U.S. torture after 9/11, went to the streamer for $14 million.  And by week’s end Amazon went after a comedy titled “Brittany Runs a Marathon,” starring Jillian Bell, buying it for $14 million. It later plunked down another $5 million on the Shia LaBeouf-written “Honey Boy.”

There isn’t math behind these sales that make any particular sense, despite the fact that the tech giants are supposedly driven by data, according to a number of individuals in the know. Amazon is looking for subscribers to its Prime service, and needs a credible lineup of entertainment to compete with the crushing volume of original content now coming from Netflix. (Amazon did not immediately respond to a request for comment.)

Amazon chief Jeff Bezos is capable of spending anything he needs to compete in the entertainment space, having just reported yet another behemoth quarterly earnings triumph.

That leaves the second-tier of buyers to compete over the rest. The noble task of finding movies, buying them at a price and then marketing them to (hopefully) success is left to the likes of Sony Pictures Classics, which bought a David Crosby documentary by producer Cameron Crowe.

Or the taste-making indie distributor A24, which bought a Tilda Swinton starrer “The Souvenir.” Or The Orchard (which is now owned by 1091 Media and is planning a name change), which bought Frédéric Tcheng’s documentary “Halston.”

IFC acquired U.S. rights to Keira Knightley’s “Official Secrets” and “The Nightingale,” the latest film from Jennifer Kent, the Australian director of “The Babadook.”

Scrappy Neon, which has shown distinctive taste in choosing movies in the last few years, was probably the most aggressive indie in the “have-not” space, punching above its weight to buy a number of films.

One agent I spoke to who sold a number of films disputed this thesis, saying that a couple of films went to traditional distributors over the streamers — including Netflix — who wanted to pay more.

“What the streamers can often offer is greater or more immediate reach to consumers, which sometimes make sense for that particular film,” said Rena Ronson, co-head of UTA’s  Independent Film Group. “So a lot has to do with knowing your film and making the right choice not just financially, but creatively and strategically.”

But many other distributors I talked to were coldly realistic about their chances to nab the buzziest movies premiering at the festival.

“We’re buying what we can,” said the head of one art-house distribution company. Most of the second-tier sales did not announce the prices in their news releases, a sure sign that the figures were modest.

Notably absent from the buying activities (at least at time of publication) were more traditional art-house studios based at the majors like Focus Features and Fox Searchlight. (Weirdly, WarnerMedia’s New Line stepped up to by Gurinder Chadha’s ’80s-set teen movie “Blinded by the Light” for $15 million).

This makes for a strange dynamic in the indie space, especially since many of the tech giants have now hired veteran executives who are used to competing in the scrappier world.

But then — why should the world of indie film be any different than the rest of the country?