ABC has revealed the first two contestants on the new season of “Dancing With the Stars.”

Nickelodeon alum JoJo Siwa and newly minted Olympic gold medalist Suni Lee will be among the 15 celebrities to test their ballroom dancing merit on the ABC competition this season. Their casting was announced during a Television Critics Association press tour panel on Thursday.

“Dancing With the Stars,” which is heading into its 30th season, will premiere on Monday, Sept. 20 with returning host Tyra Banks and judges Len Goodman, Carrie Ann Inaba, Bruno Tonioli and Derek Hough. 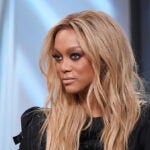 Also Read:
Tyra Banks Blasts Claims That She Banned ‘Real Housewives’ From ‘Dancing With the Stars’

Sunisa “Suni” Lee recently took home the women’s gymnastics all-around gold medal at the 2020 Olympic Games in Tokyo. The 18-year-old gymnast made history and headlines as the first Hmong American to compete at the Olympic games, winning a total of three medals.

Siwa, a veteran of Lifetime’s “Dance Moms” franchise, is a singer and social media star with more than 60.5 million followers and 3.6 billion views on her YouTube channel. She is next set to star in and executive produce the live-action musical “The J Team” at Paramount+, also serving as creative director and executive producer of Peacock’s upcoming “Siwa’s Dance Pop Revolution.”

The remaining 13 contestants will be revealed on ABC’s “Good Morning America” on Wednesday, Sept. 8.