It’s not just the shot of a field of corn that puts one in mind of Terrence Malick when watching Terence Davies’ “Sunset Song.” Like Malick, Davies has entered a period of unprecedented productivity in his golden years: After the long wait between 2000’s “The House of Mirth” and 2011’s “The Deep Blue Sea,” “Sunset Song,” which adapts a novel by Lewis Grassic Gibbon, is the first of two Davies movies slated for release in 2016. (The Emily Dickinson biopic “A Quiet Passion” should arrive in the fall.)

But unlike Malick, whose increased output has left his recent movies feeling less like completed works than sketches for an infinite, unfinishable canvas, Davies remains as precise and particular as ever.

With the exception of “A Quiet Passion” and the dyspeptic essay film “Of Time and the City,” Davies has spent the last two decades adapting others’ work, but whether he was taking on Edith Wharton or Terence Rattigan — so many Ter(r)ences! — the themes of longing and repression were made passionately his own. “Sunset Song” is cooler, more prosaic (a descriptor, not a judgement) and, perhaps not coincidentally, less suffused with tragic melancholy.

Fear not, ye lovers of doomed romance: The story of Chris Guthrie (Agyness Deyn), a young Scottish woman who weathers an abusive childhood and the tribulations of the first World War, still has ample helpings of pain and suffering; it could hardly be a Davies film without them. But in “Sunset Song,” Chris is like the small patch of Scottish farmland on which she lives out her entire life: ravaged by the elements and the vicissitudes of fate, but never washed away.

The constant stream of misfortunes that befall Chris and those around her verges, at times, on the comic: It’s hard to suppress a whispered “womp-womp” when she and her new husband Ewan (Kevin Guthrie) muse on the bright future ahead and are interrupted by a passing wagon-driver announcing the onset of the Great War. As Chris’ father, a Bible-thumping tyrant who rapes his wife and beats his eldest son, Peter Mullan is like a classic rock band touring their greatest hits; he plays the shifts from genial patriarch to furious monster expertly, but you can feel every change coming in advance. 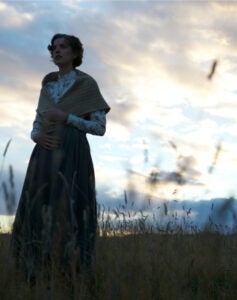 Deyn, a fashion model whose principal previous screen exposure was as Aphrodite in the remake of “Clash of the Titans,” walks a fine line between stoicism and inertia. Given the uncomfortable results when she’s pushed into a near breakdown in the closing minutes, having her underplay most of the film is the wiser choice, but it leaves us gazing at Chris from the outside rather than experiencing her from within. Although the voiceover, taken from Gibbons’ novel, prescribes a clash between “the two Chrisses,” one a rugged Scottish lass, the other a colonial subject schooled in English decorum, the conflict between them is more spoken of than seen, in a movie that at times struggles to break free of its novelistic origins.

Given the prevalence of voiceover, it’s a special shame that Magnolia has made the decision to subtitle “Sunset Song” for its U.S. release. The characters’ brogues are admittedly thick at times, but it’s nothing that can’t be adjusted to in the course of a few minutes — the film’s unsubtitled screenings at the Toronto Film Festival unspooled without significant incident — and the onscreen text serves as an unwanted distraction from Michael McDonough’s fine photography, which combines digital interiors with 65mm landscapes. Transcribing lines like “I’ll libb you like a lamb” doesn’t make them any clearer, and there are occasional minor errors as well, including a botch of the words to Psalm 23.

There are moments in “Sunset Song” that rank with Davies’ most poignant, like that opening shot, when the dry rustle of cornstalks is broken by the sight of Chris arising among them, as if the earth itself had given birth to her. Music has always played an essential role in Davies’ movies, and it’s key here, as well. He floods the soundtrack with choral harmonies as a priest climbs the lectern to deliver his sermon, pausing at the top as if waiting for the last note to fade, while the darkened church behind him floods suddenly with night. In Chris’s barn, a lap dissolve turns a raucous “Auld Lang Syne” singalong into an intimate duet; the other bodies fade away, leaving her and Ewan alone.

In some respects, “Sunset Song” seems like an odd choice for Davies, whose artistic temperament favors English delicacy over Scottish earth. But one of his great subjects has always been time, and the way memory can make us long for even dark periods in our past.

The hazy quality of “The House of Mirth “and “The Deep Blue Sea” is absent from “Sunset Song’s” sharp-edged images, but so are their fatalistic undercurrents: Those movies drag their heroines toward death, but “Sunset Song” assures us that Chris will survive, although those around her benefit from no such guarantee. She’s plugged into something eternal, as is Davies himself.