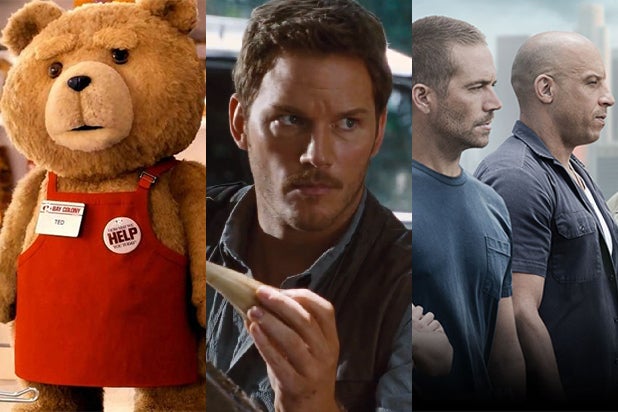 Only half of the movies that advertised during last year’s Super Bowl went on to commercial success, and of the top five movies at the 2014 box office, only one — “Captain America: The Winter Soldier” — advertised during the Big Game.

But it’s hard to quantify whether the ad placements had any impact on the films’ eventual returns, so studios will continue to bring their biggest and most highly anticipated films to the show.

Here are the films you can expect to see new footage from during this Sunday’s Super Bowl. This post will be continually updated as more spots are confirmed and/or released.

“The Spongebob Squarepants Movie: Sponge Out of Water”
Release Date: February 6, 2015
The latest adventure for the underwater sponge and his friends, which takes them into live-action and 3D, will reveal new footage during the first half-hour window of the game, right before Idina Menzel sings the National Anthem.

“Kingsman: The Secret Service”
Release Date: February 13, 2015
Fox’s latest comic book adaptation won’t wait for the game to start before showing off its footage — spots will run during the pregame.

“The Divergent Series: Insurgent”
Release Date: March 20, 2015
Shailene Woodley returns as Tris Prior in the sequel to the latest YA hit “Divergent,” this time taking on Kate Winslet again in a dystopian futuristic Chicago. Lionsgate has made the full teaser trailer that will air during the Super Bowl pregame show available online. Watch it above.

“Furious 7”
Release Date: April 3, 2015
New footage from Paul Walker‘s final ride with the “Fast and Furious” franchise has been teased via the film’s and Walker’s Facebook pages for days, so this is one on everyone’s radar.

“Tomorrowland”
Release Date: May 22, 2015
Disney’s latest theme parks-inspired movie has George Clooney playing an inventor and Britt Robertson as a delinquent teenage genius. Together they take the audience on a journey to discover what “Tomorrowland” really is. The full preview will debut on Sunday, but for now a tease is available online. Watch it above.

“Ted 2”
Release Date: June 26, 2015
Rumor has it Tom Brady will make a surprise cameo appearance in the “Ted 2” spot that will run during Sunday’s game. But ahead of that spot, Universal has made a brand-new full-length trailer for the Mark Wahlberg comedy available online. Watch it above.

“Minions”
Release Date: July 10, 2015
The “Despicable Me” spinoff will reveal new footage during the big game, but like a number of the other films advertising during the show, the ad has been made available online ahead of its TV debut. Watch it above.

“Terminator Genisys”
Release Date: July 1, 2015
Paramount is planning a splashy second-quarter bow for the latest tease of its “Terminator” reboot, which sees Emilia Clarke as Sarah Connor, Jason Clarke as John Connor and Arnold Schwarzenegger returning as the T-800. Watch the full spot above.