“Super Giant Robot Brothers” is a new 3D animated action-comedy coming to Netflix in days, and TheWrap has an exclusive sneak peek at a scene from the series.

In the clip, which you can watch below, Shiny (the red one) accuses Thunder (the silver one) of stealing his, well, “thunder.” 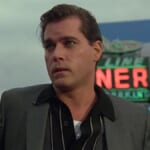 The series will find the robot siblings working together to defend Earth when space monsters attack.

All episodes of the new animated series drop Aug. 4 on Netflix.