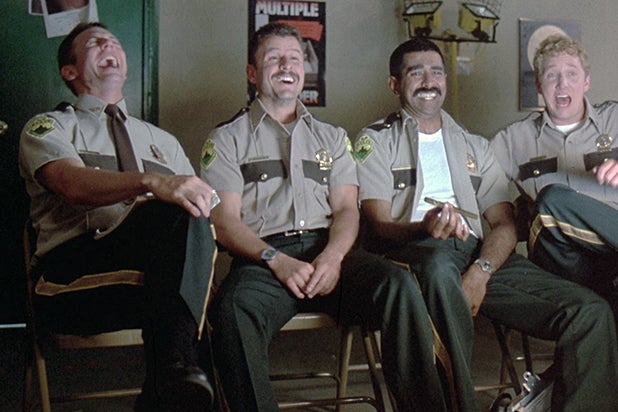 “The fans have been asking for it for a while, but we were finally able to package everything together,” Steve Lemme told UsWeekly on Friday. “Fox is going to distribute the film, but we needed to raise the money for it, with a minimum budget of $27 million, which we’ve just about raised. There may be a Kickstarter launched to raise the last little bit.”

Lemme starred in the original “Super Troopers,” about five Vermont cops with a penchant for screwing up in hilarious ways. He also co-wrote the film — which quickly became a cult classic — along with his Broken Lizard brethren Jay Chandrasekhar, Kevin Heffernan, Paul Soter and Erik Stolhanske.

As TheWrap reported in 2013, a sequel to the comedy has been in consideration since at least early 2013, but progress has been slow. Lemme explained that away as a “combination of having to settle some of the legal disputes about making a sequel, while also negotiating terms for it.”

Fox Searchlight Pictures has not immediately responded to TheWrap‘s request for comment.

Lemme didn’t go into great detail about the plot of the impending sequel, but he indicated it would basically pick up where the last film left off.

“I think it’s one of the more unique and interesting stories I’ve seen in awhile,” he added. “But the movie picks up pretty much where we left off in the first one. It’s a few years later. The biggest difficulty was trying to top that opening scene, which so many people have complimented us on. I think we’ve done it.”

Much has changed in the world since the original film debuted in 2001, but Lemme assured fans that facial fashion among the Vermont State Police had not.

“Everybody who had a mustache in the first one will grow it back,” he said. “Now the guys who didn’t grow mustaches for the first one want to have a mustache. We’re making them earn it, not sure how we’ll haze them, but they better be prepared.”