What’s a scientist to do when she’s spent her whole life relying on empirical evidence only to find out she possesses actual magic? Well, Lena Luthor is still trying to figure that out. But according to the “Supergirl” showrunners, she’s going to have a lot of support while she does.

This week’s episode of “Supergirl” has Lena (Katie McGrath) finally returning to work with the Super Friends at the Tower. She’s reluctant to talk about what she learned in Newfoundland, hoping to just dive back into her work. Of course, this week, her work is all about magic. Between trying to manage Nyxly and her growing powers and needing a Kryptonian witch to help in that task — one who definitely knows Lena’s new secret — the younger Luthor is struggling.

But “Supergirl” showrunners Robert Rovner and Jessica Queller say fans shouldn’t be worried about when she does clue everyone in.

“They’re grateful for the help,” Rovner told TheWrap. “You know, one of the things that’s different about this season is that our characters are being transparent with each other and there are no secrets, which allows for better communication. So we’re excited for that, especially for Lena who, you know, in her past held so much so close to the vest, that this time, she can share what she’s going through with her friends, and they can help her as they each help each other.” 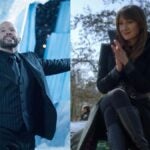 “They’re there for her, and everyone is supportive,” Queller added. “Everyone is very supportive and nurturing of each other and their particular skills and talents.”

All it’ll take on Lena’s part is a little courage. Of course, that’s something none of the others are struggling with this week.

Thanks to the courage totem that Nyxly hunts down, half of the Super Friends are suddenly cursed with an overabundance of the feeling. It leads to some reckless actions, but admittedly some humor. In fact, “The Gauntlet” is one of the lightest episodes of “Supergirl” in awhile, and it’s something the showrunners wanted to lean into.

“We have been very serious and we wanted to kind of reset a little bit and have a little lightness, which the show has gotten to explore a lot, but not as much this season because we’ve been dealing with very heavy stuff,” Rovner said. “So we’re proud that the emotional undercurrent of the episode is still very much there, but then we were able to have some fun with this totem in particular.”