National City’s next Guardian is coming. On this week’s episode of “Supergirl,” Kelly Olsen officially began her journey as a superhero, deciding to pick up where her brother left off, with the help of her already heroic girlfriend. And for series stars Azie Tesfai and Chyler Leigh, kicking off that adventure together hit on a lot of levels.

That said, one of the most important levels for Tesfai was that this move is truly Kelly’s own decision. Alex may be wholeheartedly supporting the move, but she doesn’t suggest or lead Kelly to it. “I love that the choice to step into her power for change as a superhero came from Kelly,” Tesfai told TheWrap.

What prompts her to make that choice? Well, since leaving Obsidian North, Kelly’s gotten a job with social services (a full day of training was the reason given for her absence during the Super Friends’ reunion in the season premiere last week). But, in her first few days on the job, she encounters a home full of alien foster kids, being run by a woman who is mistreating them.

Obviously Kelly can’t turn a blind eye and by the end of the hour, she’s used some superheroic stunts to obtain evidence, called the cops and gotten justice for the kids. And that feeling of exhiliration and service isn’t one she wants to give up. 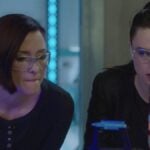 “This community needs someone who is willing to fight for them, even when the system isn’t listening,” Kelly says. “It’s time to pick up where Jimmy left off. I want to be the new Guardian.”

What made the moment even better for Tesfai was how ready her loved ones were to support her in this journey, with Alex having already gotten the Guardian helmet from James Olsen.

“She made the decision that she was ready and Alex was there in full support. That while the journey for Kelly to fully step into being a superhero came from her, she already had the backing of Alex and even Jimmy,” Tesfai said. “What a dream partnership that is!”

Of course, Alex’s support of Kelly was pretty much a no-brainer for Chyler Leigh. It was just another moment that proved how strong Dansen’s — as the two have come to be shipped — relationship is, and how fully the two women see each other.

“Alex’s love, and also her insight into who Kelly really is – you know, Kelly doesn’t get read a lot. She’s the one that reads people. And so she finally found somebody who can read her,” Leigh told TheWrap. “She sees everything in Kelly. She sees that spark in her eyes, she knows how passionate she is about making change, real deep change in the world. And she believes in her more than anybody.”

So, what does this mean for Dansen going forward? Well, it certainly doesn’t lower the attraction between the two. But it does make PDA a little harder.

“That alone, coupled with [putting] her in some badass suit and riding a motorcycle, and that’s some sexy s—,” Leigh added. “So that kind of sets things up really nicely. Although I will say, trying to have any sort of romantic moment when you’re wearing super suits is super challenging. Because the suits make a lot of noise. You can’t lift your arms too high. Like, there’s only so much you can do in super suits. And granted she has a helmet. It’s interesting”

But yes, they’ll also be side by side in battle too. “I can’t wait for everyone to get to see them kicking butt together,” Tesfai said. “Talk about a power couple!”

“I couldn’t imagine having done anything like that with anyone other than Azie, who’s just a phenomenal human being,” Leigh noted.