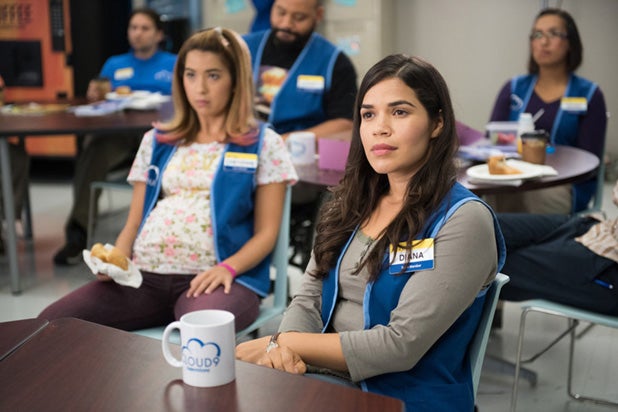 As the daughter of Latin American immigrants, Ferrera attributes the parts she chooses to her “political heart.” The role of Amy, the supervisor of a big-box store called Cloud 9, struck her as a “worthy representation” of the life of an average American, an opportunity she wouldn’t have had in film.

“There’s less and less opportunity in film to tell stories that aren’t about superheroes,” Ferrera told TheWrap. “And no one’s surprised by that. I think television is becoming this haven for telling the nuanced stories about being human that there’s less room for in film.”

Ferrera spoke with TheWrap about portraying workin- class characters, diversity in casting and whether there are better opportunities in TV or film.

TheWrap: You’ve talked about the appeal of playing working class characters, and it’s something that you’ve done before on “Ugly Betty.” What appeals to you about telling these kinds of stories?
Ferrera: I’m the daughter of immigrants who came to this country very much working class. I grew up — before I had certain opportunities in my career — working from the time I was 13 to help contribute to the family, and to the things I needed and wanted. And so I think that I have a political heart and I can’t get away from that. As an actor, the things that inspire and excite me are things that matter to me. And while this is a comedy, and it’s very funny and very entertaining, I do think it’s so refreshing and unique on television right now to give a platform to the working class. And to represent the working class as smart, humorous, alive, engaged people. The working class is the majority, and to be giving voice to the way that the majority of Americans live is a reason why I think the show will connect.

Was diversity in casting something you were looking for when you came back to TV?
When this show came to me, they had already cast Colton Dunn, Nico Santos, Mark McKinney and Lauren [Ash], and I looked at the casting and thought, “they’re really doing something special here.” They’ve written a show without kind of signifying that this character has to be this race or that race. Amy wasn’t written Latina. That really piqued my interest, and I really got excited about the opportunity they were creating to see a cast of people on television that doesn’t look like your average white cast.

My preference of how I think diversity is effective on television is not merely to write content towards a certain ethnicity and kind of market it to a specific group. I think that’s so short-sighted. To me, I’m not just Latino. I’m so many things. I’m American, I’m a woman, I’m a millennial, I care about politics.

What was it about the character Amy that appealed to you specifically?
I think it was that she was your every-man American. She wasn’t a loser and she wasn’t dumb, and she didn’t waste her life. And it wasn’t, “Oh, if you’re in a minimum wage job then you must have done something to get yourself there.” She was written as a bright, intelligent, humorous women to whom life happened. And that she’s not portrayed as the victim. She’s not portrayed as someone who wants to get out of her life. She’s living a life that to others might seem small and not very sexy, but to her she’s just living and surviving. And doing a job that pays her bills. And fulfilling her responsibilities. And I think that’s a really worthy representation of how so many Americans live.

You’ve done a lot of work in TV and film throughout your career. Do you have a prefer one medium over the other?

I wouldn’t say that I have a preference, but I think it’s very exciting what’s happening today on television. There’s less and less opportunity in film to tell stories that aren’t about superheroes. And no one’s surprised by that. I think television is becoming this haven for telling the nuanced stories about being human that there’s less room for in film.