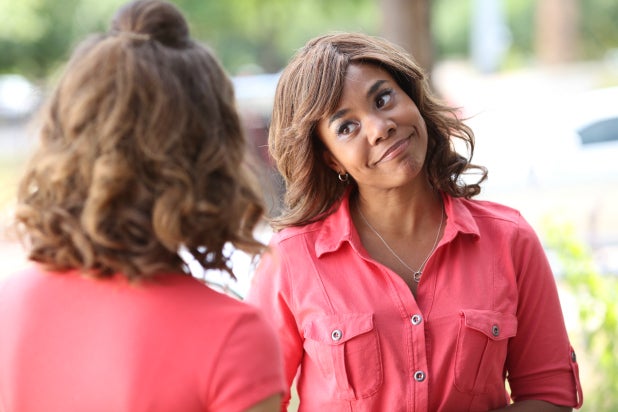 Smile, be attentive and flirty — but not too flirty — and call a manager if things get out of hand. These are the basic rules for being a waitress at Double Whammies, the “sports bar with curves” at the center of “Support the Girls,” and this chicken-wing emporium becomes a handy metaphor for women making their way through the patriarchy in writer-director Andrew Bujalski’s observant and trenchantly funny new film.

While the movie is simultaneously a day-in-the-life farce, a cri de couer for working-class women and a testament to the strengths (and the limitations) of created families, it is more than anything an opportunity for the great Regina Hall to shine in an all-too-rare leading role. She makes Lisa, the manager at Double Whammies, hilarious and heartbreaking and irksome; we admire this character’s strength and her loyalty to “her girls,” but we also understand that her problems aren’t entirely the fault of other people.

Those other people give her plenty to contend with, though: She’s got a crew of 20-something waitresses dealing with dramas of their own, a piggish boss (James LeGros) making her life difficult, a would-be burglar stuck in the air vents (and knocking out the cable that supplies endless ESPN to the bar’s dozens of big-screen TVs), and a recalcitrant husband, not to mention an abused employee who needs legal fees and the impending arrival of ManCave, a national chain restaurant poised to put Double Whammies out of business.

Lisa and her employees are doing their best to get through the world, and you see how they’ve resigned themselves to flirting their way past obstacles. When Lisa needs a sound system for a car wash, for example, she sends Danyelle (hilarious newcomer Shayna McHayle, aka rapper Junglepussy) to sit through a home-theater demo with Jay (John Elvis), the married A/V salesman who dotes on her. Danyelle is explicit up front that this is going nowhere, and he is not to touch her, but her attention is enough to make Jay putty in her hands.

But “Support the Girls” isn’t a movie about female manipulation; it’s about women being stuck in low-paying jobs where their dignity faces routine assault. (It’s telling that the one customer quick to defend the waitresses from insults is a butch lesbian played by comedy vet Lea DeLaria.) The Double Whammies staff could be waitresses or staff sergeants or flight attendants or stock brokers; all the world’s a Hooters, and even the Commander in Chief feels entitled to grab them.

Hall gets to run a full emotional gamut as Lisa; she’s the kind of boss you want in your corner, but also the kind that you have to occasionally remind to mind her own business. She lets us see the thousand daily paper cuts this woman has to endure on her soul, and we see the fragile interior behind her sparkling Southern charm. (The film is set in a featureless Houston strip mall.)

It’s a dynamite ensemble overall: Haley Lu Richardson (“Columbus,” “The Edge of Seventeen”) walks away with much of the movie; waitress Maci has the kind of infectious energy that would have made her an ideal sorority rush chair, yet it never comes off as fake or forced. She’s so in charge of her own vivacity that it becomes her shield against a harsh world. Brooklyn Decker pops in for one devastating scene as a ManCave recruiter, packing every line with hard-won cynicism.

Cinematographer Matthias Grunsky, a longtime collaborator of Bujalski’s, exploits the Texas flatness and the endless span of roadside retail. (The sound design never lets us forget that the highway is never far away, with cars and trucks endlessly whizzing by.) Grunsky knows when to go hand-held — a confrontation with a car-wash customer in the parking lot, for instance — but he and Bujalski aren’t afraid to lock down for long takes, which these performers know exactly how to fill.

It would be easy to underestimate “Support the Girls” in the same way that people might roll their eyes at the hard-working women who toil in these “family-friendly,” décolletage-centric eateries, but there’s a desperation behind these smiles, and a moving story being told in a brightly-lit, music-blasting atmosphere. Sit at the table, and let these women tell you about their lives.