Whatever it is Cassidy Hutchinson saw, it’s probably good: The Select Committee is reconvening Tuesday for the “surprise” witness who reportedly had a front-row seat as Donald Trump reacted to the Capitol riots in real-time.

The testimony of Hutchinson, a former top aide to Trump White House Chief of Staff Mark Meadows, is at least one reason for the surprise hearing, now scheduled for 1 p.m. ET on Tuesday. When the committee gaveled out last week, it was expected that they wouldn’t return until July. 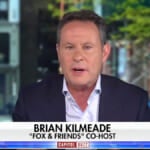 But on Monday the House Select Committee Investigating the Jan. 6 Attack on the Capitol said it was coming together Tuesday to hear “recently obtained evidence” and hear from at least one witness. It appears that witness is Hutchinson, according to Punchbowl.

Hutchinson was Meadows’ executive assistant and has already appeared in the hearings via video depositions. Among other things, she named House GOP lawmakers who were seeking pardons.

Meadows has refused to testify. Punchbowl noted that Hutchinson has become more cooperative after recently changing lawyers, from Trump-world counsel to the attorneys who once represented former Attorney General Jeff Sessions.