(Spoiler Alert: Please do not read on if you have not yet watched Wednesday’s “Survivor” finale)

Ben Driebergen, a 34-year-old marine from Boise, Idaho, won the $1 million prize and the title of sole “Survivor” to cap off the 35th season dubbed “Heroes vs. Healers vs. Hustlers.” Driebergen began the game on the “Heroes” tribe.

An analytical eye towards the season’s editing hinted at his win. Producers included multiple tangents focused on Driebergen personally, such as apparent manifestations of PTSD and his family’s role in his mental health, even when a key storyline of a particular episode focused elsewhere.

After a taped two-hour final episode, host and Executive Producer Jeff Probst revealed the winner before a live audience at CBS Television City in the Fairfax neighborhood of Los Angeles on Wednesday night. The crowd was overwhelmingly on Driebergen’s side. 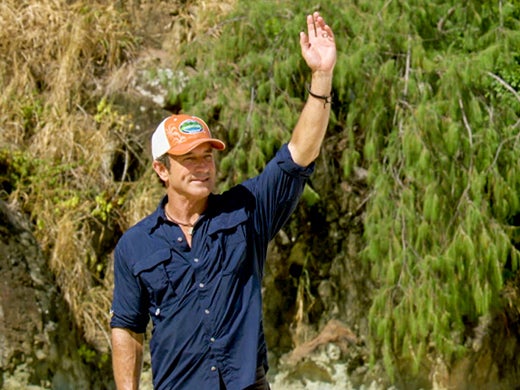 All season long in press, Jeff Probst had promised “one of the best finishes.” (CBS/Screengrab)

A Surprising and Controversial Finish

From the earliest pre-season publicity, Probst promised “one of the best finishes” in the show’s history. He told Entertainment Weekly’s Survivor expert Dalton Ross: “Who knows? Minds may be changed in the jury.”

Driebergen won his way in to the final three to face the jury in a new surprise twist.

As the fire challenge played back on monitors in the studio before the live show began, the crowd greeted Driebergen’s pre-taped challenge win with a standing ovation. Online, many fans saw the twist as a controversy.

Chrissy won an advantage that helped her lose the game. Should there be such a ridiculous wrench to the game at final 4? #rhap

Had Driebergen lost, or if the show had held to the traditional format of voting people out at the final four, Driebergen would have been eliminated one day before the end. Someone else would have won.

The Audience Has Spoken

The original primetime reality franchise is still a ratings winner for CBS.

It routinely outdraws its Wednesday night competition in total viewers, toping “Empire,” “The Goldbergs” and “Riverdale.” In the advertiser coveted 18-49 demographic, it regularly places first or second (to “Empire” or network specials) and outdrew the curiosity of the “Christmas in Rockefeller Center” special right after NBC fired Matt Lauer.

With another season already shot and casting for future seasons underway, the show is a few pickups away from milestones. A 39th season could — and should — have some tie to the show’s legendary “39 Days … One survivor” tagline. Production on a 40th season could begin in about a year, in spring 2019.

CBS Chief Les Moonves has told TheWrap that the show will stay on the air as long as it keeps up the ratings.

Despite innovations in gameplay like a player canceling the vote of another player, the chance to fake a vote and keep it for another round, and a so-called “shot-clock” idol that had to be used within a set amount of time before losing power, this season had a classic feel.

Departing from the glamour casting of recent years, casting director Lynne Spiegel Spillman and producers rediscovered classic archetypes of early reality TV. There was a tough former marine, a straight shooting blue collar woman (Lauren Rimmer, a fisherwoman), a streetwise probation officer angling to outwit a book smart urologist before they united as one, and a scrappy young quirk with an odd job in the form of Ryan Ulrich, a turtleneck wearing bellhop.

Fans of CBS’ reality strategy shows will not have to wait long for fresh shows. “The Amazing Race” returns with its 30th – and in all likelihood final – season on Wednesday, January 3. The first U.S. “Celebrity Big Brother” debuts a month later on Feb. 7 at 8 p.m.