(Spoiler Alert: Please do not read if you haven’t watched the finale of “Survivor: Cambodia – Second Chance” that aired Wednesday night on CBS.)

Jeremy Collins, a firefighter from Cambridge, Massachusetts, was crowned sole “Survivor” and winner of the $1 million prize on the season finale. He swept the final vote, winning 10-0-0 against fellow finalists Spencer Bledsoe and Tasha Fox, the largest victory in the show’s history. Collins first appeared on the show in the fall of 2014 with wife, Val, who did not compete in this season. The two kept her pregnancy a secret throughout the filming of the series last summer.

Wednesday night’s two-hour finale and one-hour live reunion capped the longest public-facing season of the reality originator by lasting seven months. This “Second Chance” season actually began back on May 6 when CBS announced a two-week, nationwide, public vote to pick twenty returning players from a field of 32. 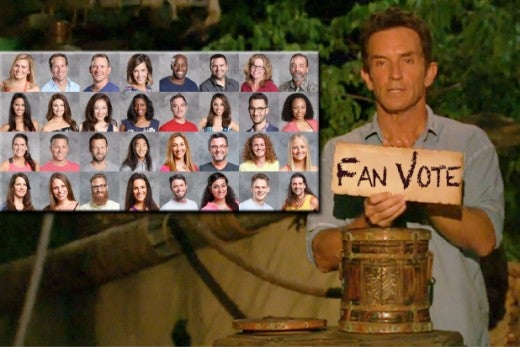 Fans voted 20 alums back on to the show from a pool of 32 in CBS’ contest that ran during May 2015. (Photo illustration by Mikey Glazer, images via CBS)

Back in May, Jeff Probst d the cast live on-air before they were sequestered and subsequently shipped directly to Cambodia to begin shooting (see video above). 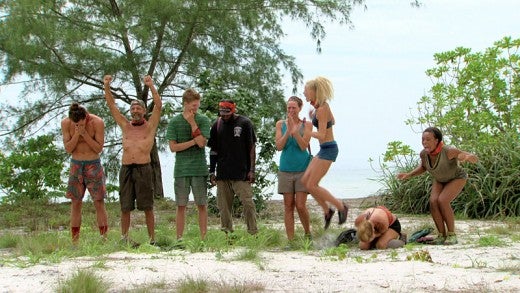 Contestants react to a surprise family visit earlier in the season. (Courtesy of CBS)

In its 31st season on air since debuting as a cultural phenomenon in summer 2000, the show consistently won its Wednesday 8 p.m. timeslot over the last month of the fall season.

Excluding a flukey double episode aired on an across-the-board lowly rated Thanksgiving (unfortunately, a substantive highlight of the season that netted a series low), the show has averaged a 2.1/7 share in the advertiser coveted 18-49 demographic and 9.19 million viewers over the last month.

Season 31 was actually the 32nd to be produced. It aired out of order ahead of a previously produced season in the same location in early spring 2015. The unaired season (technically “32”) will air in spring 2016.

This multiplied the challenge producers faced. On one hand, they had to come up with new twists to surprise the cast of “32” that they h on-air before. Then, with news, leaks and spoilers from the 32 production available before the “Second Chance” contestants left to play in Cambodia, producers Probst, Mark Burnett and challenge producer John Kirhoffer had to further iterate to keep the returning cast on their toes. They pulled it off.

Over 15 years into its broadcast run, this season saw the first “vote steal” advantage (won by People Magazine blogger, lawyer and “Rob has a Podcast” co-host Stephen Fishbach), immunity idols “hidden” in plain view at group challenges, and a split from two tribes into three earl