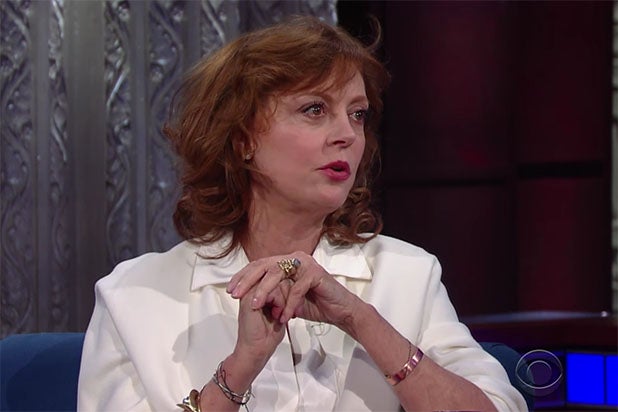 Susan Sarandon is being skewered on Twitter for saying that the Trump presidency has, in some ways, been good for America.

The “Feud” star, an outspoken Trump critic and Bernie Sanders supporter during the presidential election, stopped by “The Late Show” on Friday to address her previous comments about Trump inciting a political revolution in America.

“People are really awake now because the cracks have let the light in,” Sarandon told host Stephen Colbert, echoing comments she’s made since the election.

“Goldman Sachs has been in politics forever, and now we’re noticing because this guy is such a bozo that he’s just doing everything so badly that he’s not slick like everybody else,” she said. “I mean, all the fracking that’s been going on, the pipelines were all there before Trump got in. This has been going on, but now everybody’s awake, they’re energized, right? They’re calling their senators, they’re donating to all of these groups.”

“You’re funnier, don’t you think?” she said to Colbert.

Sarandon’s critics have taken to Twitter to call out the actress for her comments, suggesting that her “privilege” has caused her to overlook the real issues presented by the Trump administration.

“I’m done with @SusanSarandon,” wrote another. “Her ignorant statements about an “energized” electorate while harm is done to those without her privilege.”

Read some of the reactions and watch Sarandon’s full interview below:

@Mediaite What is Susan Sarandon smoking?

“You’re funnier.” – @SusanSarandon has noticed some changes at #LSSC since Trump took office.

Hey @susansarandon feeling all energized now?
Arrested while applying for a green cardhttps://t.co/b59C6Zrr8w

Please go away forever and never pretend to stick up for the disadvantaged. https://t.co/TYd57yXgQe