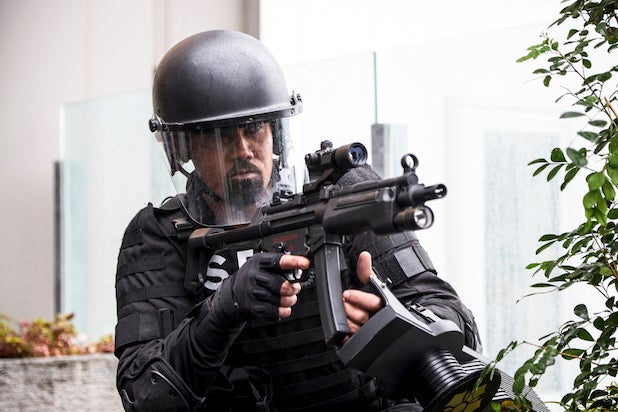 As demonstrators across the country take to the streets to protest racism and police brutality, the writers and executive producers of the CBS police drama “S.W.A.T.” have vowed to take a harder look at the way their show portrays policing in the United States on screen.

The “S.W.A.T.” writers room account first tweeted a statement on Monday, expressing support for peaceful protesters and calling on police to “deescalate conflicts, not exacerbate them.”

“We are watching recent events in horror and sadness along with everyone else, and we will continue to mine the truth about these issues in the writing of our upcoming season as we all work towards a fairer, better system,” the account wrote. “In the meantime, we encourage protestors to express their frustrations peacefully and implore law enforcement to deescalate conflicts, not exacerbate them, as people work through their understandable anger and grief.”

Shortly after, Thomas retweeted the statement, adding “Frustrated, angry, but determined to do better. Onscreen and off.”

Currently in its third season on CBS, “S.W.A.T.” stars “Criminal Minds” alum Shemar Moore as Daniel “Hondo” Harrelson Jr., a S.W.A.T. team leader and Los Angeles native who functions as a bridge between the community and the LAPD.

Frustrated, angry, but determined to do better. Onscreen and off. https://t.co/TAMRh7R1pb

Los Angeles, like other cities across the country and around the world, has seen thousands of its residents take to the streets over the last week to protest police brutality following the death of George Floyd while in police custody in Minneapolis. After days of clashes between protesters and LAPD, Mayor Eric Garcetti implemented a citywide curfew over the weekend and the deployed of the National Guard.