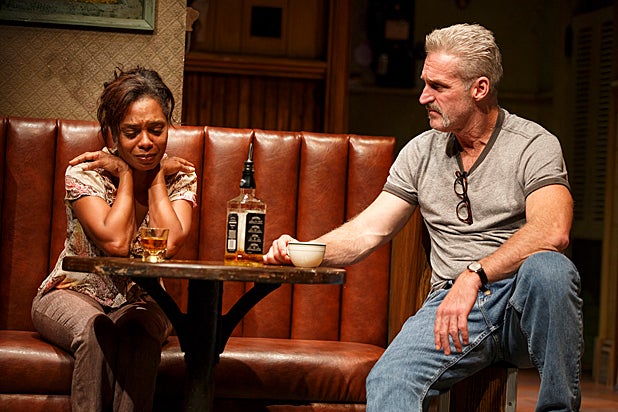 This review of Lynn Nottage’s “Sweat,” which opened on Broadway Sunday with the same cast, first appeared in November with the opening of the original Public Theater production.

If you go to the theater a lot, you’ve spent many nights in one of those grungy neighborhood taverns populated with colorful, often very loud, and usually drunk characters. People who go the theater a lot may never have actually stepped into such a joint — the word “bar” is far too upscale to describe the place — but we know the scene well since playwrights feel compelled to keep taking us there. Most of these plays give the impression that the drinking-hole locale is simply an easy way to bring together a lot of disparate people who will eventually end up at each other’s throat, fueled by resentment and liquor.

In its early scenes, Lynn Nottage’s extraordinary new play “Sweat,” which opened Thursday at Off Broadway’s Public Theater in New York, gives that all-too-familiar impression of a stage damp with beer. The difference is, Nottage not only knows her soon-to-be-unemployed factory workers; it’s clear she has lived among them for years.

Act one of this rich two-and-a-half-hour play recalls the work of Elmer Rice and Clifford Odets; Nottage, however, achieves much more than a very craftsman-like update. It’s 2000 and the bartender (James Colby), a former factory worker injured on the job, mentions the ill effects of NAFTA. Some of the tavern’s patrons don’t know what he’s even talking about. “Sounds like a laxative,” jokes Tracey (Johanna Day, as always, incapable of making a false move), who doesn’t yet know that she, too, will soon be an ex-factory worker.

Frankly, Nottage is a better writer than either Rice or Odets. She’s not scoring points for some leftist, anti-capitalist screed. There’s nothing agitprop about her play, which could be retitled “Sweat, Liquor, and Then Crack.” Nottage takes a character like Tracey, whose family goes back for three generations in this Rust Belt town, as well as the factory itself, and makes us understand how this woman’s rage produced a son, Jason (Will Pullen), who ends up tattooing his face with white-supremacist graffiti. This revelation is not a spoiler. Nottage’s story begins with Jason’s parole, in 2008, then flips back and forth between then and 2000. That use of time is always illuminating, never a flashy device that obfuscates the real drama.

When it comes to blue-collar workers like Tracey, Nottage reveals that it’s a loyalty thing. Tracey believes her family built the town, put in generations of work at the factory, and her son is owed the right to continue that tradition. Tracey also believes she deserves the promotion that will take her off the floor of the factory to join management in its air-conditioned offices.

Not deserving that promotion, she believes, is her best friend on the floor, Cynthia (the powerful Michelle Wilson), who was the first in her family to work at the factory. And of course, Cynthia is black. Most of “Sweat” is set in 2000, but during this presidential election, it told me more about today’s white high school-educated voters than watching cable news almost nonstop for months now.

Which is not to say Nottage is out to trash the Traceys of the swing states. On the contrary. She hands this misunderstood woman the most poignant scene in “Sweat”; it comes early in the play when Tracey explains her general discontent to a bus boy, Oscar (Carlo Alban), a Colombian-American who will go on to be the scab that takes Tracey’s job. It pays him $11 to her $40 an hour, which is $3 more than he’s getting to scrape old Bubblegum off the underside of the tavern tables.

Nottage deploys this gift for naked disclosure at various key moments. Tracey’s confession to Oscar is paralleled in act two with Cynthia’s pride-filled revelation to disgruntled coworkers: her son (Khris Davis), like Tracey’s, will continue the family’s tradition at the factory. Cynthia’s pride doesn’t survive, but somehow her son endures despite all odds.

Nottage keeps many characters at the edges of her drama. It’s easy to dismiss Cynthia’s deadbeat ex-husband, Brucie (John Earl Jelks), and Tracey’s inebriated coworker, Jessie (Miriam Shor). At first glance, Bruce and Jessie are losers. Nottage forces us to give them much more than a second look, to witness their own very individual tragedies.

Kate Whoriskey directs a remarkable cast that never condescends, and always finds the humanity in Nottage’s characters. “Sweat” offers a bleak political-economic picture, but not one without trust in the future. Mitt Romney in 2012 said that corporations are people too. Nottage definitely disagrees, because corporations don’t take care of people. “Sweat” leaves us with the hope that only people take care of people. It is a play that will be performed long after the era it defines has passed.