With Robert Englund ceding the latex and knife-fingered gloves to Jackie Earle Haley, the reboot of Wes Craven’s 26-year-old "Nightmare on Elm Street" franchise got off to a big start Friday, grossing $15.8 million at U.S. and Canadian theaters.

The Warner/New Line R-rated horror film, produced by Michael Bay and shot on a budget of around $27 million, is on pace for a $34 million weekend.

In second place Friday, DreamWorks Animation’s "How to Train Your Dragon" remains a competitive force six weeks into its run, dropping only 26 percent week-to-week and grossing $2.6 million. It’s on pace to add $11.7 million to a domestic total that will exceed $190 million by the end of the weekend.

The weekend’s only other wide release, Summit Entertainment family film "Furry Vengeance," finished in sixth place with $1.7 million. Starring Brendan Fraser, the PG-rated film — budgeted well below $30 million after location tax breaks and incentives — isn’t even on pace to meet the low side of its $7 million-$10 million pre-release tracking range.

Fox romantic comedy "Date Night," meanwhile, is showing legs four weeks into its run, dropping just 24 percent to $2.5 million. It’s on pace to finish the weekend with about $8 million, which would put the $55 million film’s four-week domestic total at $74 million.

Also competing for female audience members, CBS Films’ J.Lo vehicle, "The Back-Up Plan," did OK in week two, dropping 43 percent Friday to $2.4 million. Shot for $35 million, the second movie from the fledgling CBS Films division is looking to finish its second weekend with over $23 million in cumulative gross — not great, but a vast improvement over the unit’s first project, "Extraordinary Measures."

Overall, the domestic box office was way off the pace the $152 million-plus weekend experienced this time last year, with Friday pacing 34 percent below that threshold.

One nightmare should be ending another this weekend.

Hosting scrums between middling new releases and 3D holdovers the last several weeks, the domestic box office is primed for something it hasn’t seen in a while – a clear-cut winner.

Warner/New Line’s R-rated horror reboot of “A Nightmare on Elm Street” is poised to gross between $20 million to $30 million at 3,332 theaters — which should easily win a North American market that was claimed last weekend by five-week-old 3D holdover “How to Train Your Dragon” and its $15.4 million performance. 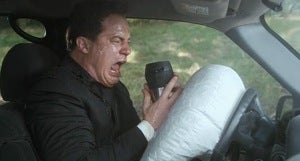 “This is a very, very strong franchise,” noted Warner distribution president Dan Fellman, remarking on “Nightmare.” “We’re going to have a good weekend.”

The film was produced for around $27 million, and stars Jackie Earle Haley in the R.E.M.-sleep tormenting Freddy Krueger role, which predecessor Robert Englund played to nearly $290 million in domestic box office across seven low-budget movies dating back to 1984.

Franchise creator Wes Craven co-wrote the screenplay, which is framed around a largely no-name cast, with Michael Bay producing.

New Line horror reboots have fared well of late. Last year, the studio re-introduced the 30-year-old “Friday the 13th” franchise, opening it up on Valentine’s Day weekend to $40.6 million. The film, which cost only $19 million to produce, ended up grossing $91.4 worldwide.

Also in relatively recent history, New Line combined its peanut butter with its chocolate in 2003 with “Freddy Vs. Jason,” which grossed $82.6 million on a $30 million production budget.

Meanwhile, battling for second place with tracking estimates in the $7 million-$10 million range, “Furry Vengeance” will open in 2,999 theaters.

Jointly financed by Summit, Participant Productions and Image Nation, the film – featuring urban developer Fraser’s character being tormented by a horde of echo-minded fuzzy critters – cost $35 million to produce. However, location tax breaks and other subsidies more than halved that toll, an executive close the production said.

"Vengeance" should benefit from the paucity of family movies currently in theaters (“Dragon” was the last PG-rated release, and that was six weeks ago).

Reviews, however, might be problematic, with aggregator Rotten Tomatoes scoring it with a conspicuous 0 percent fresh.

Declining less than 20 percent each weekend, “Dragon” should once again rank highly this weekend, with the film already past the $180 million mark domestically.