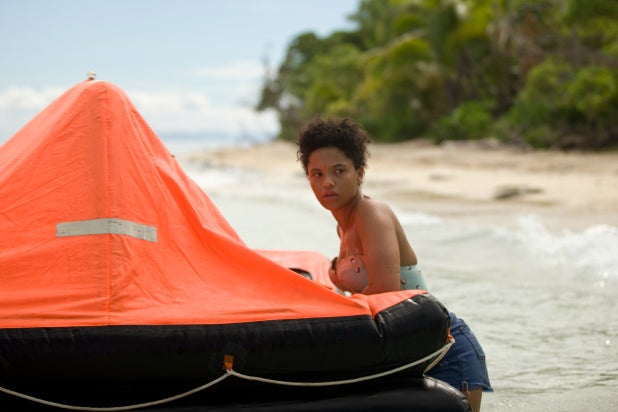 A perhaps necessary reminder in the wake of “The Shape of Water” that sea creatures, as a rule, should probably not be looked at as romantic partners, “Sweetheart” complicates — and elevates — a survival story by pitting a desperate young woman against a primordial beast determined to make her its dinner.

Director and co-writer J.D. Dillard (“Sleight”) delivers a smart, streamlined thriller that skillfully integrates a careful whisper of social commentary into a story that also unfolds masterfully as a straightforward genre workout.

Kiersey Clemons (“Hearts Beat Loud”) plays Jenn, a young coed who washes up on the beach of a tiny, idyllic island alongside another ailing passenger from the boat she, her boyfriend Lucas (Emory Cohen), and a group of college kids took out for vacation. While she’s exploring the island for food, supplies and other survivors, her companion dies, and she buries his body in the sand on the beach not far from where she decides to make camp. But when she awakens in the morning to discover that the body has been abducted, she begins to fear what else might be on the island, eyeing her as a future meal.

While trying one night to flag one of the planes that passes over the island, Jenn discovers that the creature actually makes its home in the water, venturing onto land under the cover of night to hunt. But not long after a confrontation with the beast a few nights later, Lucas and another passenger, Mia (Hanna Mangan Lawrence), wash up in a life raft.

Though she’s relieved to see them, Jenn quickly grows frustrated that they don’t believe her claims about the monster and express little of the urgency she shows to get off the island. But after an attempt to escape in the life raft gets intercepted by the monster, Jenn and her friends find themselves in a desperate fight for survival, with a menacing ocean standing between them and home, assuming they’re able to defeat this extremely determined creature.

Dillard, co-writing the script with Alex Hyner and Alex Theurur, pares down this story to its most basic and, as a result, its juiciest elements: Jenn is quite clearly a fighter, and the contrast of the mysterious menace with her tenacity to survive makes for genuine suspense. Her early moments alone on the island are largely uninterrupted by dialogue, so her slow discovery of the island’s minimal resources — and her self-education about how to get food and shelter — feel realistic and satisfying.

She’s neither a born survivalist nor a clueless sorority girl who happened to google the right scenes from “Castaway”; rather, Clemons makes Jenn sharp, sensitive and observant, qualities as valuable when she’s finding ways to avoid the beast as when she’s navigating her circumstance-tested relationship with Lucas. Her solutions to each new problem also feel intuitive and believable, which is precisely why we share in her confusion and eventual frustration that Lucas and Mia seem disinterested in trusting her.

But Dillard has also made “Sweetheart” about gender, race and class dynamics, although those elements unfold only in subtle measures (at least in comparison to the bizarre oversized monster chasing the human characters around this tiny island). Cohen, winning as Saoirse Ronan’s husband in “Brooklyn,” unfortunately proves a little too immediately convincing as Jenn’s patronizing, blue-blood boyfriend, and his bloated entitlement too quickly sets the stage for those complicating confrontations that escalate Jenn’s anxieties about the limited chance she’s already calculated that they’ll safely make it off the island.

Also Read: 'The King' Film Review: Timothée Chalamet Fights for the Crown, On and Off the Battlefield

His treatment of her almost from the first second they’re reunited underscores both his privilege and her belittlement, tapping into complexities of her life as a young black woman among rich whites that they simply cannot understand and don’t seem willing to learn. Suffice it to say that dynamic, and simply who she is, sets her apart from her companions, but Dillard both writes the character and directs Clemons to underplay skillfully an effort to clarify her point of view in a way that, quite frankly, a person of color absolutely might in an environment, even on a desert island, where she remains the minority.

Dillard and his co-writers introduce a few loose plot threads — including mysterious blood stains in the lifeboat and an inexplicably used pocket knife — that unfortunately never go further than amplifying our suspicions about certain characters’ trustworthiness. But otherwise the film is a straightforward mer-monster riff that deftly merges ideas from “Predator” and “Lord of the Flies,” and harkens back to tropes first popularized in “Creature from the Black Lagoon.” Moreover, the filmmakers’ use of creature design, gore, and brilliantly measured obfuscation creates a sense of dread that only builds the clearer the silhouette of the beast comes into focus.

Ultimately, “Sweetheart” not only fully delivers the conventions of genre and storytelling that audiences expect from the film’s premise, but it also elevates and refines them to a sharp point, both thrilling them with the prospect of this character’s survival and prodding them to think about how much more she has to overcome — every day — than a shipwreck and a sea creature.